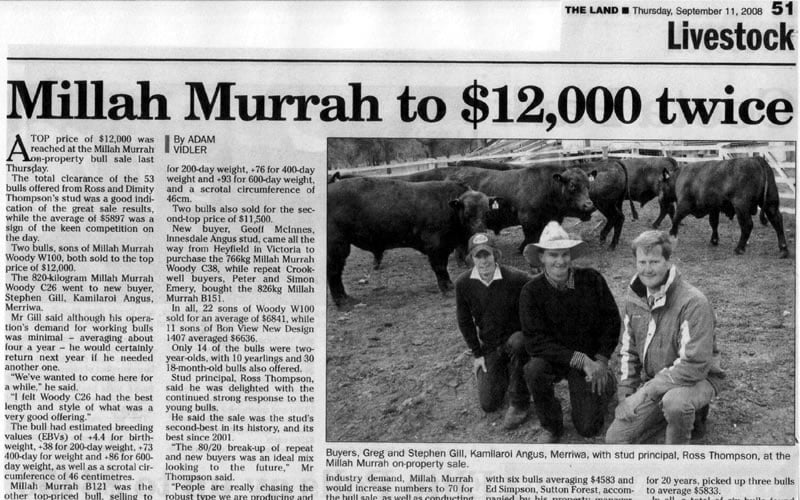 A top price of $12,000 was reached at the Millah Murrah on-property bull sale last Thursday.

The total clearance of the 53 bulls offered from Ross and Dimity Thompson’s stud was a good indication of the great sale results, while the average of $5897 was a sign of the keen competition on the day.

Mr Gill said although his operation’s demand for working bulls was minimal – averaging about four a year – he would certainly return next year if he needed another one.

“We’ve wanted to come here for a while,” he said.

“I felt Woody C26 had the best length and style of what was a very good offering.”

Only 14 of the bulls were two-year-olds, with 10 yearlings and 30 18-month-old bulls also offered.

Stud principal, Ross Thompson, said he was delighted with the continued strong response to the young bulls.

He said the sale was the stud’s second-best in its history, and its best since 2001.

“The 80/20 break-up of repeat and new buyers was an ideal mix looking to the future,” Mr Thompson said.

“People are really chasing the robust type we are producing and for which Woody W100 has become renowned.”

Looking to 2009, Mr Thompson said depending on season and industry demand, Millah Murrah would increase numbers to 70 for the bull sale, as well as conducting its first registered female sale since 2003.

Mike Gilder, Merriwa, who has been buying Millah Murrah bulls for 20 years, picked up three bulls to average $5833.

In all, a total of six bulls found new homes with other Angus stud operations.