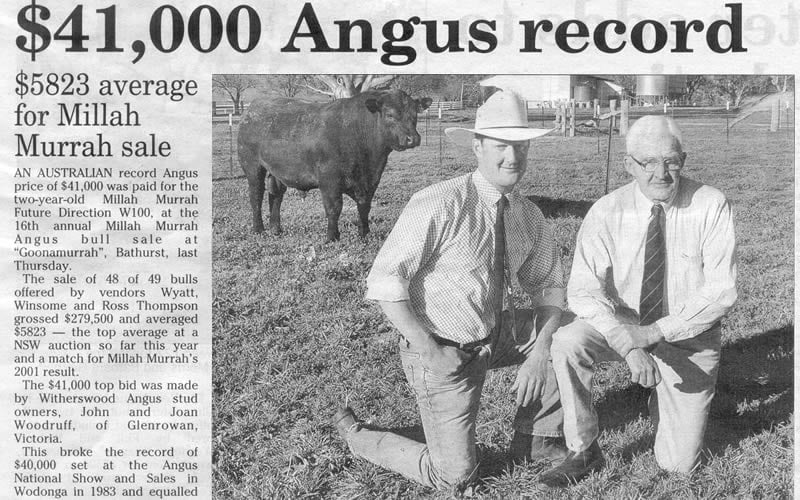 The $41,000 top bid was made by Witherswood Angus stud owners, John and Joan Woodruff, of Glenrowan, Victoria.

This broke the record of $40,000 set at the Angus National Show and Sales in Wodonga in 1983 and equalled last year.

“I have been looking for a top stud sire and W100 has all the qualities to suit our breeding program,” Mr Woodruff said.

“He is the thickest-topped bull I have seen, with good old fashioned traits of bone, butt and wonderful balance.”

Mr Woodruff said the bull had the perfect feet and structure required of a stud sire, and was from a superb feminine cow with a perfect udder and conformation, that was now raising a great heifer calf.

The high selling bull was an AI son of the US sire, Future Direction, from an Ythanbrae N33-sired female.

Millah Murrah retained a half semen share in the bull, which was the heaviest in the sale, weighing 932kg with a Japanese B3 market $index figure of +$85 and a CAAB $index of +$61, both of which place him in the top five per cent of the breed.

Phil Gilbert and his manager Damien Sotter, of the Meadows Angus at Oberon, paid $9000 for a same-aged bull with the top weight for age at 708kg.

Ross Thompson, of Millah Murrah, said he was delighted to sell four bulls into studs with strong Millah Murrah influence in their cow herds.

After the sale, an emotional Wyatt Thompson announced that Millah Murrah would hold an unprecedented sale of stud female cattle on November 7.

Every female born before 2003 will be offered from the 190-strong registered breeding herd.

Wyatt and Winsome Thompson will retire to Bathurst in December, and after their wedding later this year, Ross Thompson and Dimity Jardine will continue the Millah Murrah stud, based on the retained heifer weaner portion of the existing herd.