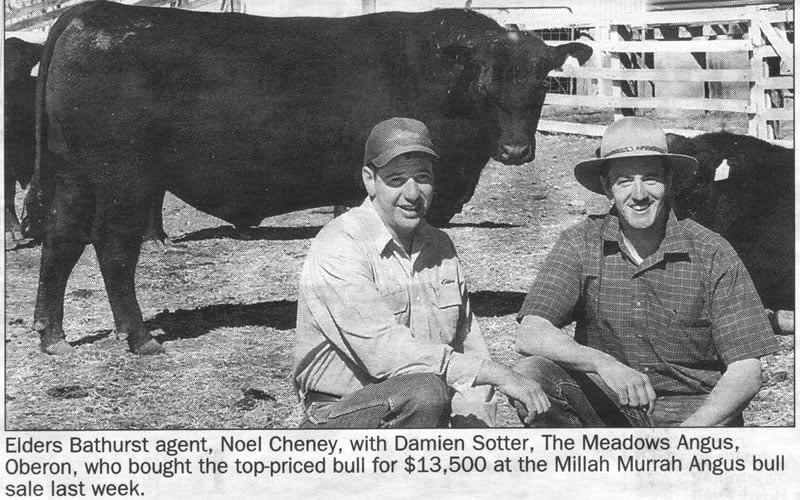 Angus bulls topped at $13,500 at the 15th annual Millah Murrah sale last Thursday. Vendors Wyatt, Winsome and Ross Thompson, “Goonamurrah”, Bathurst, sold 50 of the 60 registered Angus bulls they offered for an average of $3710. The sale was largely supported by regular buyers, and although a little disappointed with the results, the Thompsons said in light of the difficult times, it was a good sale.

Buyer of the top priced bull, Damien Sotter, manager of the Meadows Angus, Oberon, owned by Phil and Jenny Gilbert, said he was happy “to pay for the right bull”.

“He looks good physically and he’s got the right figures (Estimated Breeding values (EBV’s)), Mr Sotter said. “Bulls with these characteristics are few and far between, but you have to pay for them.”

The second top priced bull, Millah Murrah New Design W20, sold for $8000 to David Haley, “Butterlea”, Fitzgeralds Valley. The 722kg, 18 month old bull had a scrotal circumference of 42cm, and was by the same sire as the top bull and out of Millah Murrah Abigail M18.