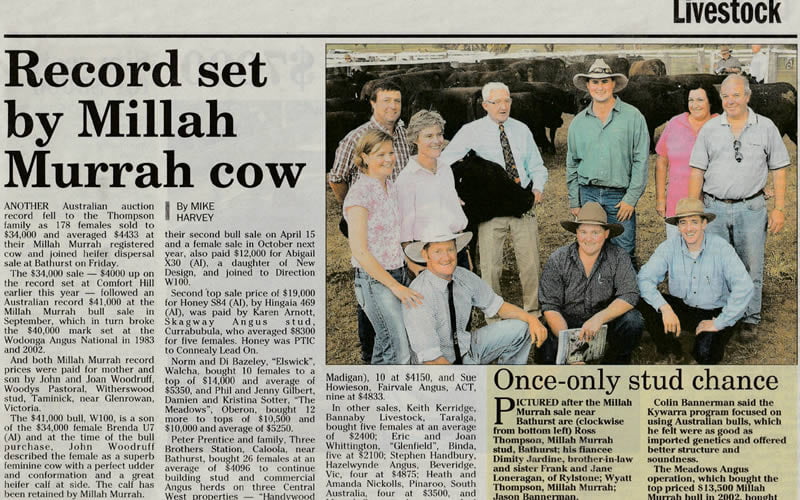 Another Australian auction record fell to the Thompson family as 178 females sold to $34,000 and averaged $4433 at their Millah Murrah registered cow and joined heifer dispersal sale at Bathurst on Friday.

And both Millah Murrah record prices were paid for mother and son by John and Joan Woodruff, Woodys Pastoral, Witherswood stud, Taminick, near Glenrowan, Victoria.

The $41,000 bull, W100, is a son of the $34,000 female Brenda U7 (AI) and at the time of the bull purchase, John Woodruff described the female as a superb feminine cow with a perfect udder and conformation and a great heifer calf at side. The calf has been retained by Millah Murrah.

Mr Woodruff backed his judgment to beat off four early bidders and finally outbid a syndicate of NSW breeders for the sale-topping cow.

Mr Woodruff said Brenda U7 would be joined next year to Future Direction in an elite female flush program.

“She is likely to become the super cow of the Angus breed over the next few years,” he said.

The Woodruffs, who will hold their second bull sale on April 15 and a female sale in October next year, also paid $12,000 for Abigail X30 (AI), a daughter of New Design, and joined to Direction W100.

Other bulk buyers were the Bannerman family, Kywarra Angus, “Innisfail”, Blayney, who through local agent Emms Mooney snapped up 16 at an average of $2781; Craig Lindsey, Associated Dairies, Grenfell, 11 at $4500; George and Loy Rose and manager Jim Sproat, Longford Angus, Armidale (bidding through Armitage and Buckley), 10 at $5350; Michael and Dimity Hirst, Midgeon Angus, Bridport, Tasmania (bidding on AuctionsPlus through Andy Madigan), 10 at $4150, and Sue Howieson, Fairvale Angus, ACT, nine at $4833.

Millah Murrah stud, founded by Wyatt and Winsome Thompson in 1969, also holds the all-breeds Australian record of $2700 for commercial cows and calves, the NSW record Angus bull sale average of $6500 and the highest 2003 Angus Eastern States bull average of $5823.

The offering of 183 females, all born before 2003, AI joined and PTIC, drew close to 100 registered buyers from South Australia, Victoria, Tasmania and NSW.

While Wyatt and Winsome Thompson will retire to Bathurst, Ross and his wife-to-be Dimity will carry on the Millah Murrah stud with 75 heifers weaners, 10 PTIC recipients and the five passed-in females which failed to make the $2000 upset price.

The sale was conducted by Elders with auctioneers Andy McGeoch and Paul Dooley.

The Bannerman family’s Kywarra Angus has a similar breeding program to that at Millah Murrah, aiming for thick, moderate cattle that perform commercially.

Colin Bannerman said the Kywarra program focused on using Australian bulls, which he felt were as good as imported genetics and offered better structure and soundness.

An Angus cow at Bathurst fetched $34,000 as the Thompson family’s Millah Murrah stud knocked over yet another breed record last week.

The cow is also the mother of the Australian breed record priced sire, W100, which the Woodruffs bought at Millah Murrah in September for $41,000.

Last week’s Bathurst sale presented an unprecedented opportunity for Angus breeders to claim a slice of Millah Murrah bloodlines as the stud dispersed all but its 2003-drop females as part of a generational changeover.

Bidders made the most of what was available paying an average $4433 for 178 females.

Millah Murrah stud, founded by Wyatt and Winsome Thompson in 1969, also holds the all-breeds Australian record of $2700 for commercial cows and calves.