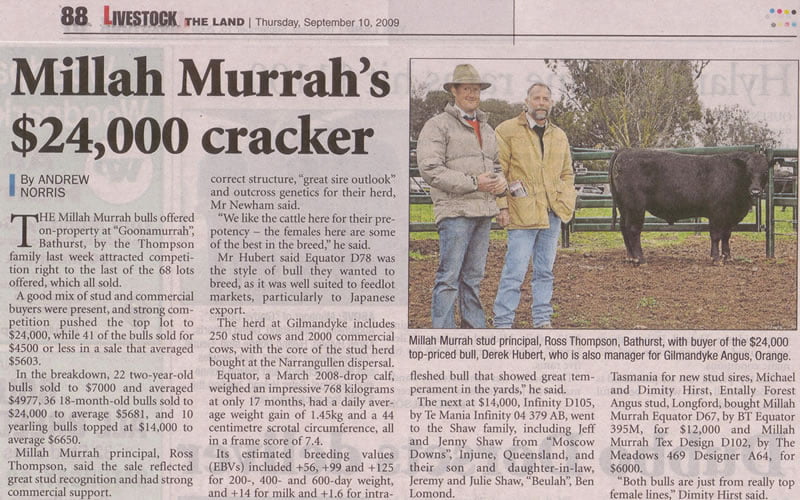 The Millah Murrah bulls offered on-property at “Goonamurrah”, Bathurst, by the Thompson family last week attracted competition right to the last of the 68 lots offered, which all sold.

He said it was as good as any of their sales in the past 23 years and included the second highest gross ($380,500) and second highest top price, and was the first year the stud had sold Pfizer Star accredited bulls.

Manager, Derek Hubert, and Gilmandyke stud consultant, Jack Newham, were on hand to buy the bull.

They chose the bull for its growth, correct structure, “great site outlook” and outcross genetics for their herd, Mr Newham said.

“We like the cattle here for their potency – the females here are some of the best in the breed,” he said.

Mr Hubert said Equator D78 was the style of bull they wanted to breed, as it was well suited to feedlot markets, particularly to Japanese export.

The herd at Gilmandyke includes 250 stud cows and 2000 Commercial cows, with the core of the stud herd bought at the Narrangullen dispersal.

Equator, a March 2008-drop calf, weighed an impressive 768 kilograms at only 17 months, had a daily average weight gain of 1.45kg and a 44 centimetre scrotal circumference, all in a frame score of 7.4.

The first of the $14,000 bulls, Equator D1, by BT Equator 395M, sold to Peter Grieve, Talooby stud, Rylstone, who was impressed by its overall structure, skin type, presence, and “a pretty handy set of numbers”.

Mr Grieve said the bottom half of its pedigree, including Kelp and 036, tied in well with his herd.

“He was also an extremely well fleshed bull that showed great temperament in the yards,” he said.

The next at $14,000, Infinity D105, by Te Mania Infinity 04 379 AB, went to the Shaw family, including Jeff and Jenny Shaw from “Moscow Downs”, Injune, Queensland, and their son and daughter-in-law, Jeremy and Julie Shaw, “Beulah”, Ben Lomond.

In their first year of buying at Millah Murrah, the Shaws’ purchases also included two bulls at $7000, to be used for breeding weaners Injune and Roma, Qld, sales.

Infinity will be used on heifers at Ben Lomond later this year by artificial insemination after they collect both Infinity and one of their new $7000 bulls, Millah Murrah Tex Design D13.

Mr Dooley described the draft over all as one of the best the stud had presented in 10 to 12 years.

He also pointed out the excellent weight for age of the entire draft, with a large part of it consisting of 18-month-old bull’s, many of which exceeded 700kg.