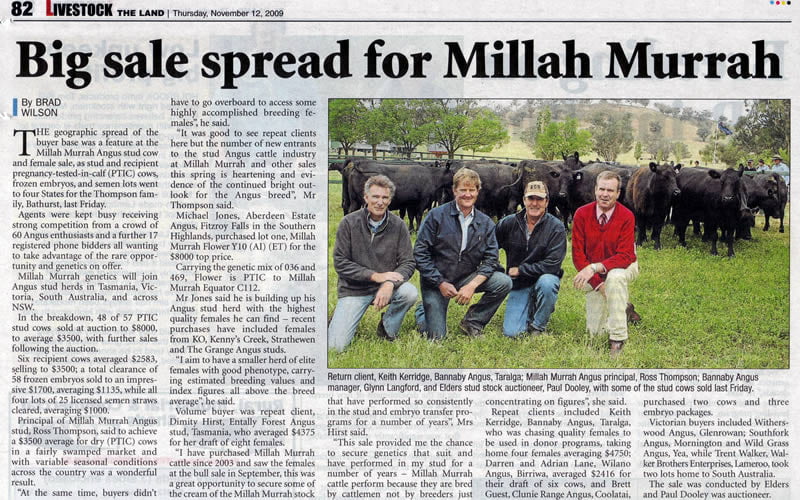 The geographic spread of the buyer base was a feature at the Millah Murrah Angus stud cow and female sale, as stud and recipient pregnancy-tested in-calf (PTIC) cows, frozen embryos, and semen lots went to four States for the Thompson family, Bathurst, last Friday.

Agents were kept busy receiving strong competition from a crowd of 60 Angus enthusiasts and a further 17 registered phone bidders all wanting to take advantage of the rare opportunity and genetics on offer.

Principal of Millah Murrah Angus stud, Ross Thompson, said to achieve a $3500 average for dry (PTIC) cows in a fairly swamped market and with variable seasonal conditions across the country was a wonderful result.

“At the same time, buyers didn’t have to go overboard to access some highly accomplished breeding females”, he said.

“It was good to see repeat clients here but the number of new entrants to the stud Angus cattle industry at Millah Murrah and other sales this spring is heartening and evidence of the continued bright outlook for the Angus breed”, Mr Thompson said.

Mr Jones said he is building up his Angus stud herd with the highest quality females he can find – recent purchases have included females from KO, Kenny’s Creek, Strathewen and The Grange Angus studs.

“I aim to have a smaller herd of elite females with good phenotype, carrying estimated breeding values and index figures all above the breed average”, he said.

“I have purchased Millah Murrag cattle since 2003 and saw the females at the bull sale in September, this was a great opportunity to secure some of the cream of the Millah Murrah stock that have performed so consistently in the stud and embryo transfer programs for a number of years”, Mrs Hirst said.

“This sale provided me the chance to secure geentics that suit and have performed in my stud for a number of years – Millah Murrah cattle perform because they are bred by cattlemen not by breeders just concentrating on figures”, she said.

The sale was conducted by Elders and Paul Dooley was auctioneer.