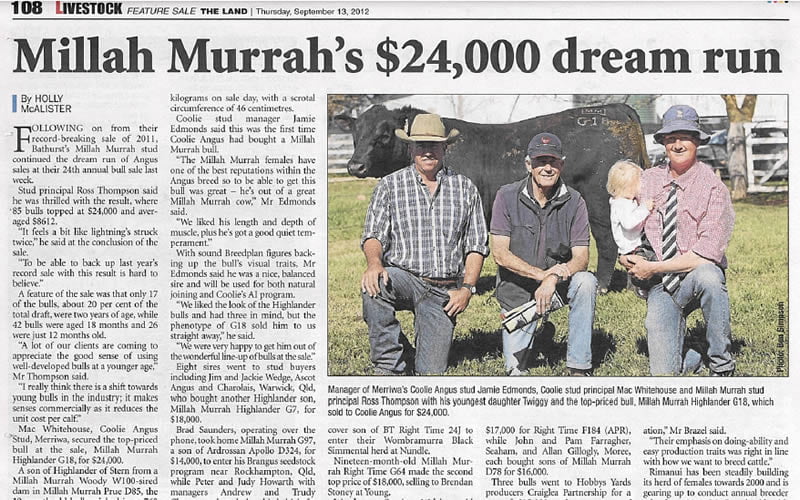 Following on from their record-breaking sale of 2011, Bathurst’s Millah Murrah stud continued the dream run of Angus sales at their 24th annual bull sale last week.

Stud principal Ross Thompson said he was thrilled with the result, where 85 bulls topped at $24,000 and averaged $8612.

“It feels a bit like lightning’s struck twice,” he said at the conclusion of the sale.

“To be able to back up last year’s record sale with this result is hard to believe.”

A feature of the sale was that only 17 of the bulls, about 20 per cent of the total draft, were two years of age, while 42 bulls were aged 18 months and 26 were just 12 months old.

“A lot of our clients are coming to appreciate the good sense of using well-developed bulls at a younger age,” Mr Thompson said.

“I really think there is a shift towards young bulls in the industry; it makes sense commercially as it reduces the unit cost per calf.”

2013 Female SaleA son of Highlander of Stern from a Millah Murrah Woody W100-sired dam in Millah Murrah Prue D85, the 19-month-old bull weighed in at 760 kilograms on sale day, with a scrotal circumference of 46 centimetres.

“The Millah Murrah females have one of the best reputations within the Angus breed so to be able to get this bull was great – he’s out of a great Millah Murrah cow,” Mr Edmonds said.

“We liked his length and depth of muscle, plus he’s got a good quiet temperament.”

With sound Breedplan figures backing up the bull’s visual traits, Mr Edmonds said he was a nice, balanced sire and will be used for both natural joining and Coolie’s AI program.

“We liked the look of the Highlander bulls and had three in mind, but the phenotype of G18 sold him to us straight away,” he said.

“We were very happy to get him out of the wonderful line-up of bulls at the sale.”

Three bulls went to Hobbys Yards producers Craiglea Partnership for a top of $15,000 and an average of $13,000.

Manager of the broadacre cropping and cattle enterprise, Mark Brazel first purchased Millah Murrah bulls in 2007, with a draft of 23 bought out of the paddock to cover Rimanui’s 800 heifers.

“I was drawn to the Millah Murrah cattle by Ross’ focus on the female side of things – right away I could tell it was a no-frills stud, run along exactly the same lines as a commercial cattle operation,” Mr Brazel said.

“Their emphasis on doing-ability and easy production traits was right in line with how we want to breed cattle.”

Rimanui has been steadily building its herd of females towards 2000 and is gearing up to conduct annual breeder sales from 2013, Mr Brazel said, with the aim to put together more than 500 top-line females on an annual basis.

Auctioneer Paul Dooley said it was a great run of bulls and affordable for astute commercial cattlemen, with 42 bulls, or half of the offering, selling between $4000 and $7000.