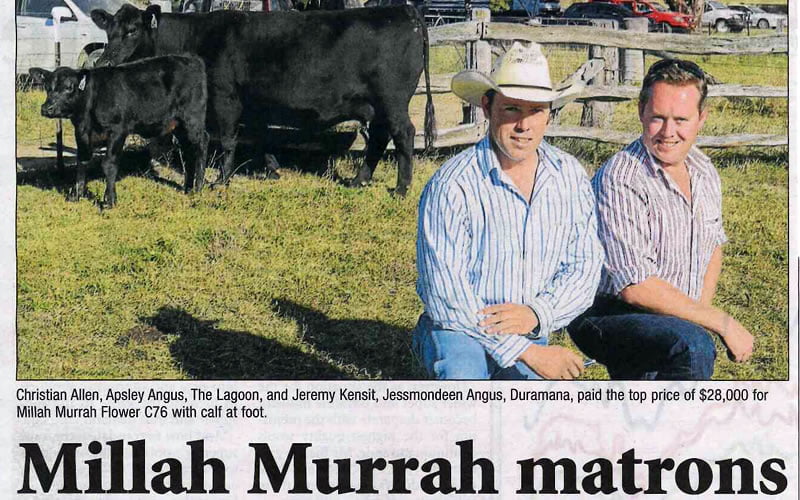 Watch the sale video for highlights.

It was full steam ahead from go to whoa at last week’s Millah Murrah Angus stud cow sale at Bathurst, where discerning cattle breeders recognised the true value of females in the breeding equation.

When the first lot through the ring made $13,000, it set the benchmark for a sale in which 112 stud cows averaged $7960 – a new Australian Angus female sale record, and believed to be the national female record across all breeds for a single vendor on-property sale.

It is the second record-breaking sale for Ross and Dimity Thompson and family in as many years.

Mr Thompson said he had been quietly confident of a solid result for the sale, which was held in order to reduce numbers in the ever-growing herd.

“There was no discernible estimated breeding value (EBV) interest from buyers, they were after foundation type cows,” he said.

“We’re mindful of the role of objective measurement, but we are thrilled to be getting recognition without being at the forefront of the EBV race.

“The real highlight was the extraordinary market acceptance of the type of animal we’re breeding.”

Mr thompson said it was good to see Australian producers put a proper value on top-end stud cows as was seen in America.

“Stud cows are undervalued,” he said.

“A good stud cow is a fantastic commodity that needs to be valued, as it is in other countries.”

The Millah Murrah herd will continue on with 250 breeders and 120 recipients, and expanded bull numbers for its bull sale in September, which has grown from 85 to 110 lots. 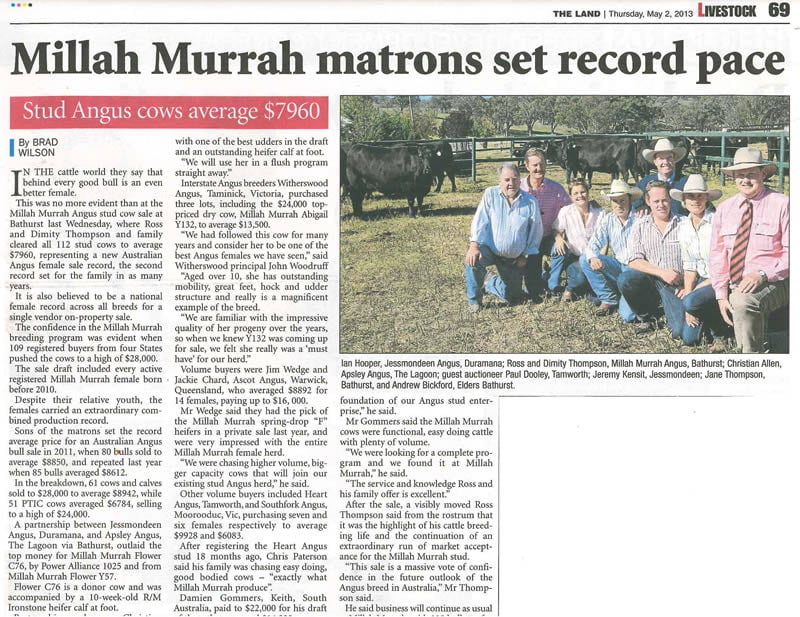 In the cattle world they say that behind every good bull is an even better female.

This was no more evident than at the Millah Murrah Angus stud cow sale at Bathurst last Wednesday, where Ross and Dimity Thompson and family cleared all 112 stud cows to average $7960, representing a new Australian Angus female sale record, the second record set for the family in as many years.

It is also believed to be a national female record across all breeds for a single vendor on-property sale.

The confidence in the Millah Murrah breeding program was evident when 109 registered buyers from four States pushed the cows to a high of $28,000.

Despite their relative youth, the females carried an extraordinary combined production record.

Sons of the matrons set the record average price for an Australian Angus bull sale in 2011, when 80 bulls sold to average $8850, and repeated last year when 85 bulls averaged $8612.

Flower C76 is a donor cow and was accompanied by a 10-week-old R/M Ironstone heifer calf at foot.

“C76 was our clear pick, the one we wanted based on pedigree and type,” he said.

“This cow is structurally correct, demonstrating excellent performance, with one of the best udders in the draft and an outstanding heifer calf at food.
“We will use her in a flush program straight away.”

“We had followed this cow for many years and consider her to be one of the best Angus females we have seen,” said Witherswood principal John Woodruff.

“ Aged over 10, she has outstanding mobility, great feet, hock and udder structure and really is a magnificent example of the breed.

“We are familiar with the impressive quality of her progeny over the years, so when we knew Y132 was coming up for sale, we felt she really was a ‘must have’ for our herd.”

Volume buyers were Jim Wedge and Jackie Chard, Ascot Angus, Warwick, Queensland, who averaged $8892 for 14 females paying up to $16,000.

Mr Wedge said they had the pick of the Millah Murrah spring-drop “F” heifers in a private sale last year, and were very impressed with the entire Millah Murrah female herd.

“We were chasing higher volume, bigger capacity cows that will join our existing stud Angus herd,” he said.

Mr Gommers is in the process of establishing an Angus stud which will be an extension to his Mandayen Limousin stud.

“We have purchased embryos from Millah Murrach recently, and the cows purchased today will help expand the foundation of our Angus stud enterprise,” he said.

“We were looking for a complete program and we found it at Millah Murrah,” he said.

“The service and knowledge Ross and his family offer is excellent.”

After the sale, a visibly moved Ross Thompson said from the rostrum that it was the highlight of his cattle breeding life and the continuation of an extraordinary run of market acceptance for the Millah Murrah stud.

“This sale is a massive vote of confidence in the future outlook of the Angus breed in Australia,” Mr Thompson said.

He said business will continue as usual at Millah Murrah, with 110 bulls set for sale in September and production to continue through the 350 retained one to three-year-old stud females and 120 recipient cows.

The sale was conducted by Elders with Paul Dooley of Paul Dooley Pty Ltd, Tamworth, the guest auctioneer.