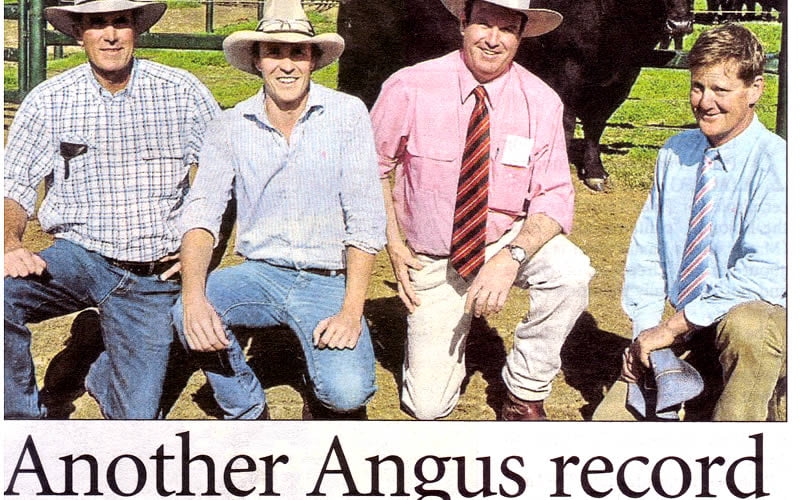 Hot on the heels of several record-breaking bull sale averages came yet another – and the best yet – from Millah Murrah Angus last Thursday.

The Australian record for an on-property Angus bull sale average was broken again at the Bathurst sale, where 80 bulls sold for an average of $8850.

This follows several averages passing $8000 in the past fortnight.

However, that record lasted no more than eight days before it was shattered by the Thompson family’s result.

John and Jock Snodgrass, Cudgell Creek Angus, Young, purchased the top-priced bull of the sale for $20,000.

The 24-month-old, Millah Murrah Neutron E161 (AI), was by Booroomooka Neutron A238 (ET) and weighed 994 kilograms with a scrotal circumference of 48 centimetres, having seen stud duties at Millah Murrah last spring.

John Snodgrass said he liked the bull’s length and mobility.

He said he appreciated the Thompson family’s long history of breeding good cattle at Millah Murrah.

The second highest bull went to John and Joan Woodruff, of Witherswood Angus, Victoria at $18,000.

The Witherswood/Millah Murrah association became prominent in 2003 when the Woodruffs paid a then Australan record of $41,000 for Millah Murrah Woody W100.

Mr Woodruff said he was pleased with the purchase.

“We liked the breeding of this bull’s sire, as well as the dams’s sire,” he said.

“We’ll use him in our artificial insemination (AI) program, turning off good doing cattle with thickness and weight.”

He said they run 350 cattle in their AI program, with some embryo transfer work to back it up.

Repeat volume commercial buyers included Rimanui Farms, “Boonaldoon”, Moree, who purchased five bulls to a top of $7500 and an average of $6700.

Allan Gilogolly, “Montrose”, Moree, bought three bulls at an $11,667 average, including the 24-month-old, 1006kg sale heavyweight by KMK Alliance I87.

Eleven bulls sold to other Angus studs, including one to The Farmer Wants A Wife star, Trent Walker, Keringa Angus, Lameroo, South Australia, who picked up one of the first Australian sons of Highlander of Stern for $14,000.

Moredun Creek Angus stud, Krambach, bought a son of Hingaia 469 from a Crusader of Stern daughter for $11,000.

Doug Tozer, Onslow Angus, Wallendbeen, grabbed a Booroomooka Neutron son from a Forres Benaud dam for $10,000, while lot one, by Innesdale Carbine, was bought by Terry Hanigan, “Hollywood”, Coonamble, for $16,000.

Sale auctioneer, Paul Dooley, Elders Tamworth, said the Australian record average result was more impressive as 13 of the bulls were only 12 months of age and 42 were just 18 months.

“It was an outstanding line-up of bulls with exceptional length and thickness”, Mr Dooley said.

“The offering included the heaviest draft of two-year-old bulls seen this season, 25 of them averaging 903kg without supplement.”

He said a sale result like this reflected a lot of confidence in the Millah Murrah program and the wider cattle industry at the moment.

Millah Murrah principal, Ross Thompson, said the stud’s program was in a strong expansion phase with 100 bulls to be put forward next year and 125 in 2013.

The sale was conducted by Elders Bathurst with Paul Dooley, Elders Tamworth, as auctioneer.

Another Angus RecordJust one week after the Australian record for an Angus on-property bull sale average was smashed – another Angus stud has pushed the bar even higher.

Millah Murrah Angus at Bathurst notched up an average of $8850 for the 80 bulls it sold at auction last Thursday.

That was up from the previous record average of $8637, which was recorded at the Milwillah Angus sale at Young the Wednesday prior and gives Millah Murrah pride of place in the record books for the top average.

Millah Murrah principal, Ross Thompson, said he was overwhelmed by the great result.

“It is a wonderful thrill for my family,” he said.

Mr Thompson said the Australian record for an on-property Angus bull sale average had sat on $8465 for nine years – this was set at the 2002 Lawsons Angus sale at Yea in Victoria.

However, this time the record lasted just eight days. 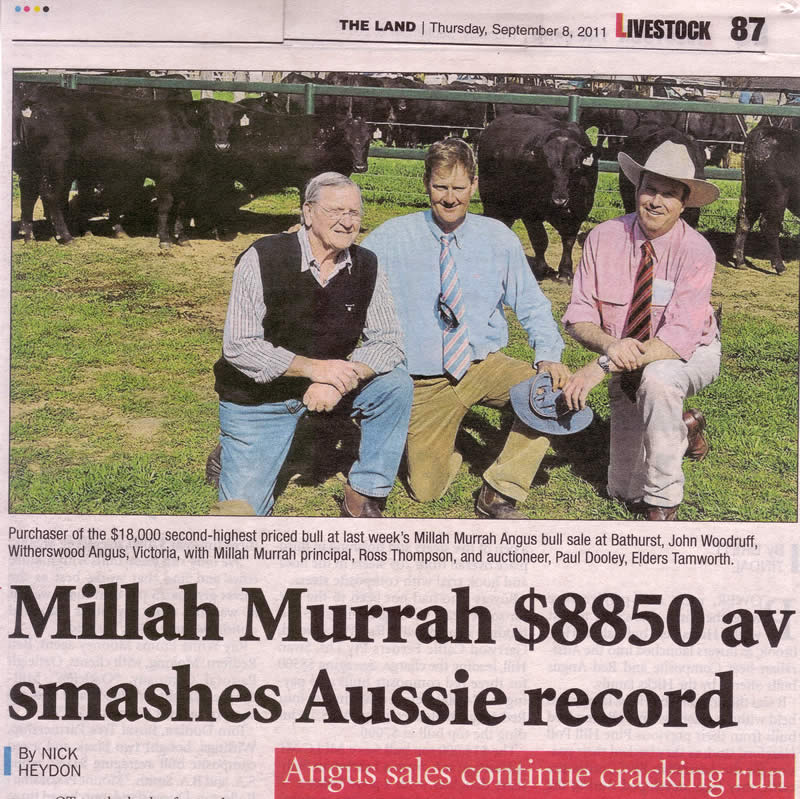