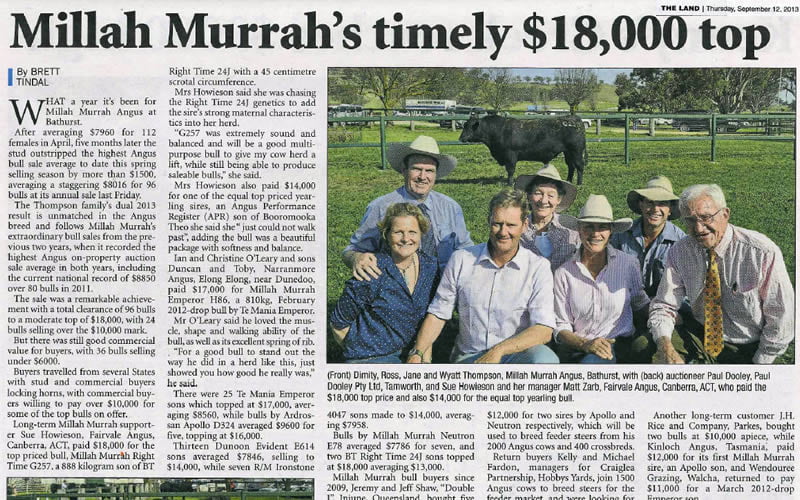 What a year it’s been for Millah Murrah Angus at Bathurst.

After averaging $7960 for 112 females in April, five months later the stud outstripped the highest Angus bull sale average to date this spring selling season by more than $1500, averaging a staggering $8016 for 96 bulls at its annual sale last Friday.

The Thompson family’s dual 2013 result is unmatched in the Angus breed and follows Millah Murrah’s extraordinary bull sales from the previous two years, when it recorded the highest Angus on-property auction sale average in both years, including the current national record of $8850 over 80 bulls in 2011.

But there was still good commercial value for buyers, with 36 bulls selling under $6000.

Mrs Howieson said she was chasing the Right Time 24J genetics to add the sire’s strong maternal characteristics into her herd.

“G257 was extremely sound and balanced and will be a good multi-purpose bull to give my cow herd a lift, while still being able to produce saleable bulls,” she said.

Mrs Howieson also paid $14,000 for one of the equal top priced yearling sires, an Angus Performance Register (APR) son of Booromooka Theo she said she “just could not walk past”, adding the bull was a beautiful package with softness and balance.

Mr O’Leary said he loved the muscle, shape and walking ability of the bull, as well as its excellent spring of rib.

“For a good bull to stand out the way he did in a herd like this, just showed you how good he really was,” he said.

On the first Tuesday of July each year the Shaws, JS Grazing, offer the bulk of their annual weaner crop and this year, over 500 of their Millah Murrah-blood steers topped at 211 cents a kilogram and averaged 205c/kg for the entire drop, a premium of more than 10c/kg in what was a very subdued market in Queensland at the time.

First time buyer at Millah Murrah, James Harris, Forster and Sons, “Abington”, Uralla, paid $16,000 and $12,000 for two sires by Apollo and Neutron respectively, which will be used to breed feeder steers from his 2000 Angus cows and 400 crossbreds.

Return buyers Kelly and Michael Fardon, managers for Craiglea Partnership, Hobbys Yards, join 1500 Angus cows to breed steers for the feeder market, and were looking for bulls with growth, length, body and balance.

The Fardons bought three bulls to a top of $13,000, averaging $11,333, including the change of bloodlines they were looking for to Ironstone and Evident.

The sale was conducted by Elders and Paul Dooley Pty Ltd, with Paul Dooley as auctioneer. 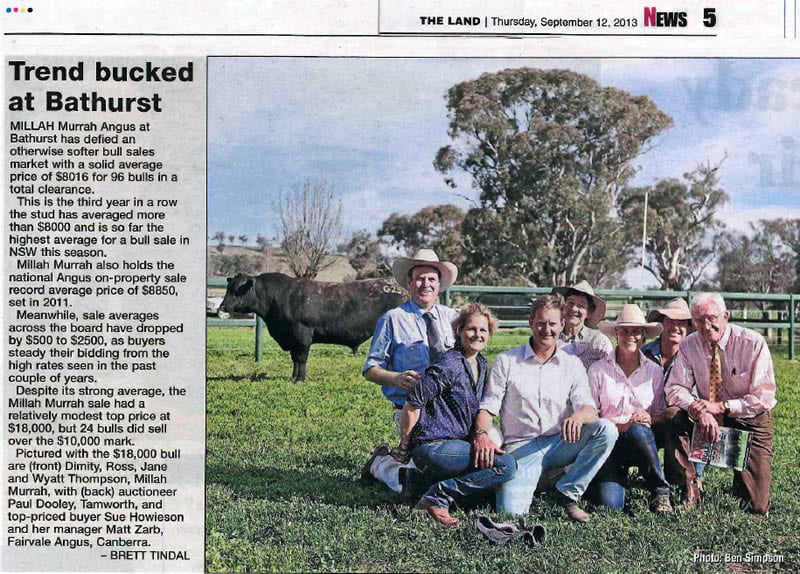 Millah Murrah Angus at Bathurst has defied an otherwise softer bull sales market with a solid average price of $8016 for 96 bulls in a total clearance.

This is the third year in a row the stud has averaged more than $8000 and is so far the highest average for a bull sale in NSW this season.

Meanwhile, sale averages across the board have dropped by $500 to $2500, as buyers steady their bidding from the high rates seen in the past couple of years.