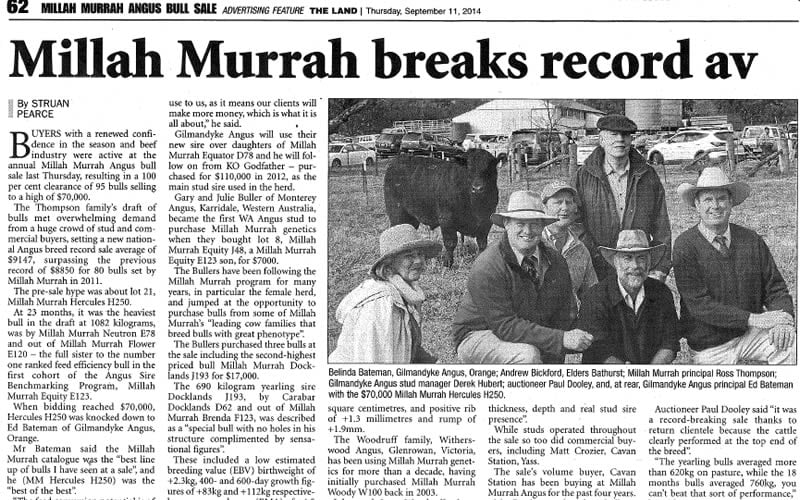 Buyers with a renewed confidence in the season and beef industry were active at the annual Millah Murrah Angus bull sale last Thursday, resulting in a 100 per cent clearance of 95 bulls selling to a high of $70,000.

The Thompson family’s draft of bulls met overwhelming demand from a huge crowd of stud and commercial buyers, setting a new national Angus breed record sale average of $9147, surpassing the previous record of $8850 for 80 bulls set by Millah Murrah in 2011.

The pre-sale hype was about lot 21, Millah Murrah Hercules H250.

At 23 months, it was the heaviest bull in the draft at 1082 kilograms, was by Millah Murrah Neutron E78 and out of Millah Murrah Flower E120 – the full sister to the number one ranked feed efficiency bull in the first cohort of the Angus Sire Benchmarking Program, Millah Murrah Equity E123.

When bidding reached $70,000, Hercules H250 was knocked down to Ed Bateman of Gilmandyke Angus Orange.

Mr Bateman said the Millah Murrah catalogue was the “best line up of bulls I have seen at a sale”, and he (MM Hercules H250) was the “best of the best”.

“The feed conversion potential is of use to us, as it means our clients will make more money, which is what it is all about,” he said.

Gilmandyke Angus will use their new sire over daughters of Millah Murrah Equator D78 and he will follow on from KO Godfather – purchased for $110,000 in 2012, as the main stud sire used in the herd.

The Buller’s have been following the Millah Murrah program for many years, in particular the female herd, and jumped at the opportunity to purchase bulls from some of Millah Murrah’s “leading cow families that breed bulls with great phenotype”.

The Buller’s purchased three bulls at the sale including the second-highest priced bull Millah Murrah Docklands J193 for $17,000.

The 690 kilogram yearling sire Docklands J193, by Carabar Docklands D62 and out of Millah Murrah Brenda F123, was described as a “special bull with no holes in his structure complimented by sensational figures”.

The Woodruff family, Witherswood Angus, Glenrowan, Victoria, has been using Millah Murrah genetics for more than a decade, having initially purchased Millah Murrah Woody W100 back in 2003.

Jock J197 was by Millah Murrah Doc F159, whose 10 sons topped the sire averages for the sale at $11,200 and was described by John Woodruff as an “outstanding yearling bull with thickness, depth and real stud sire presence”.

While studs operated throughout the sale so too did commercial buyers, including Matt Crozier, Cavan Station, Yass.

The sales’s volume buyer, Cavan Station has been buying at Millah Murrah Angus for the past four years.

Having purchased five bulls last year Cavan Station has since taken on more country and required more bulls to cover extra females in the breeding herd.

Mr Crozier said he liked Millah Murrah bulls because they were “consistent, nice even cattle and early maturing types, with balanced figures that can handle a Yass winter”.

The sale saw 118 registrations from across Australia with 60 buyers taking bulls as far as Western Australia, Rockhampton and King Island.

Auctioneer Paul Dooley said “it was a record-breaking sale thanks to return clientele because the cattle clearly performed at the top end of the breed”.

“The yearling bulls averaged more then 620kg on pasture, while the 18 months bulls averaged 760kg, you can’t beat that sort of performance,” he said.

“He’s (Hercules) been used over heifers and they had no problems – he’s a big, free moving bull that delivers.”

Clearly moved by the result of the sale, principal Ross Thompson said the result was “beyond belief”.

“Three to four days ago I thought we would struggle to sell them all”.

“The sudden surge of positive sentiments in the beef job certainly fell in our favour”.

“(There were) 118 registrations and 60 buyers took bulls home – those are wonderful numbers and hopefully augur well for our plans to increase numbers to 120 in 2015.” 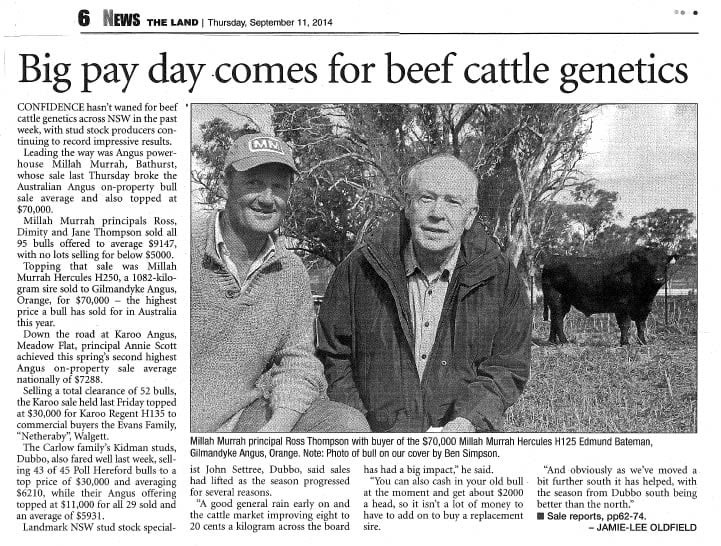 Confidence hasn’t waned for beef cattle genetics across NSW in the past week, with stud stock producers continuing to record impressive results.

Millah Murrah principals Ross, Dimity and Jane Thompson sold all 95 bulls offered to average $9147, with no lots selling for below $5000.

Topping that sale was Millah Murrah Hercules H250, a 1082-kilogram sire sold to Gilmandyke Angus, Orange, for $70,000 – the highest price a bull has sold in Australia this year.

“A good general rain early on and the cattle market improving eight to 20 cents a kilogram across the board has had a big impact,” he said.

“You can also cash in your old bull at the moment and get about $2000 a head, so it isn’t a lot of money to have to add on to buy a replacement sire.”

“And obviously as we’ve moved a bit further south it has helped, with the season from Dubbo south being better than the north.”