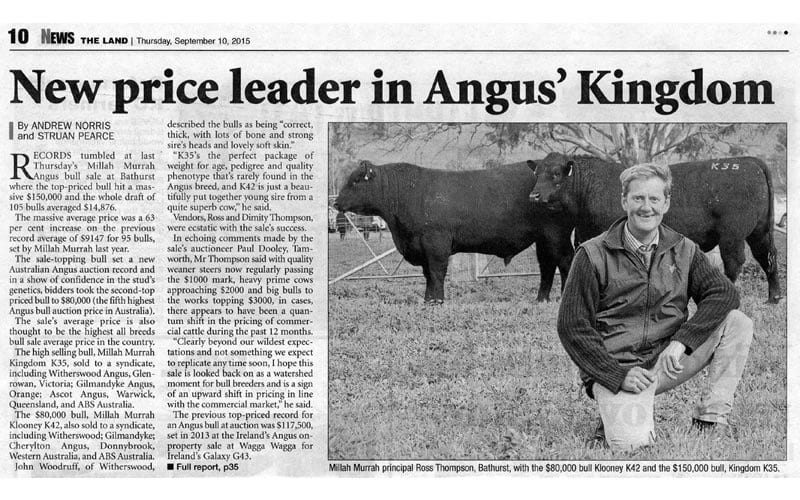 The sale set a new all breeds Australian record average price of $14,876.

Check out the sale highlights video.

Records tumbled at last Thursday’s Millah Murrah Angus bull sale at Bathurst where the top-priced bull hit a massive $150,000 and the whole draft of 105 bulls averaged $14,876.

The massive average price was a 63 per cent increase on the previous record average of $9147 for 95 bulls, set at Millah Murrah last year.

The sale-topping bull set a new Australian Angus auction record and in a show of confidence in the stud’s genetics, bidders took the second-top priced bull to $80,000 (the fifth highest Angus bull auction price in Australia).

John Woodruff, of Witherswood, described the bulls as being “correct, thick, with lots of bone and strong sire’s heads and lovely soft skin.”

“K35’s the perfect package of weight for age, pedigree and quality phenotype that’s rarely found in the Angus breed, and K42 is just a beautifully put together young sire from a quite superb cow,” he said.

Vendors, Ross and Dimity Thompson, were ecstatic with sale’s success.

In echoing comments made by the sale’s auctioneer Paul Dooley, Tamworth, Mr Thompson said with quality weaner steers now regularly passing the $1000 mark, heavy prime cows approaching $2000 and big bulls to the works topping $3000, in cases, there appears to have been a quantum shift in the pricing of commercial cattle during the past 12 months.

“Clearly beyond our wildest expectations and not something we expect to replicate any time soon, I hope this sale is looked back on as a watershed moment for bull breeders and is a sign of an upward shift in pricing in line with the commercial market,” he said.

The previous top-priced record for an Angus bull at auction was $117,500, set in 2013 at the Ireland’s Angus on-property sale at Wagga Wagga for Ireland’s Galaxy G43. 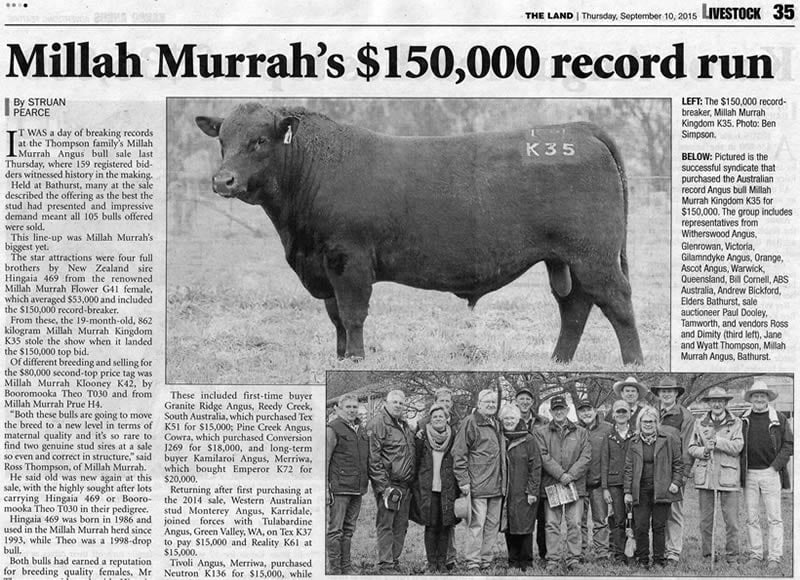 It was a day of breaking records at the Thompson family’s Millah Murrah Angus bull sale last Thursday, where 159 registered bidders witnessed history in the making.

Held at Bathurst, many at the sale described the offering as the best the stud had presented and impressive demand meant all 105 bulls offered were sold.

The star attractions were four full brothers by New Zealand sire Hingaia 469 from the renowned Millah Murrah Flower G41 female, which averaged $53,000 and included the $150,000 record-breaker.

Of different breeding and selling for the $80,000 second-top price tag was Millah Murrah Klooney K42, by Booromooka Theo T030 and from Millah Murrah Prue H4.

“Both these bulls are going to move the breed to a new level in terms of maternal quality and it’s so rare to find two genuine stud sires at a sale so even and correct in structure,” said purchasing syndicate spokesmen, John Woodruff, Witherswood Angus Glenrowan, Victoria.

He said old was new again at this sale, with the highly sought after lots carrying Hingaia 469 or Booromooka Theo T030 in their pedigree.

Both bulls had earned a reputation for breeding quality females, Millah Murrah Stud Principal Ross Thompson said, and with Hingaia 469 semen now a rare commodity, he said it was selling for $1500 a straw.

All up, 20 bulls sold into Angus stud programs.

Also paying $24,000 for his acquisition, Tex K96, was Ed Lahey for Dungay Park stud at Dondingalong near Kempsey.

Brookfield Park Angus, Cooma, outlaid $18,000 for another brother of the sale topper when they purchased Tex K36.

While the seedstock demand was unprecedented, demand from commercial buyers was also red hot.

Long-time client Matt Crozier, Cavan Station, Yass, purchased six bulls for an average of $11,166 on the back of 10 bulls purchased at the 2014 sale.

Cavan Station has been buying at Millah Murrah for the past four years.

Another return buyer, Anthony Skinner, trading as Macada Pty Ltd for his Central West properties, accompanied by his managers Steve Harris and Matt Bowden, battled strongly with the studs to purchase five bulls to a top of $20,000 to average $16,800.

Well-known Millah Murrah client, JS Grazing at Injune, QLD, paid an average of $12,750 for four bulls, while another long-term supporter, Craiglea Partnership near Blayney, paid $18,000 for the third brother of Kingdom and averaged $14,600 for five bulls.

All up, 65 buyers made purchases with more than 80 per cent of the bulls going to return buyers.

“While the cattle market has been hitting new highs, today’s sale has reached a new paradigm, it was a hell of sale,” said auctioneer Paul Dooley, Tamworth.

“Today was the first time I’ve sold a bull for more than $100,000 and sold a catalogue of bulls that grossed more than a million dollars.”

“It was exciting to be part of the day and due recognition for the Thompson Family’s breeding program.”

The sale was conducted by Elders with guest auctioneer Paul Dooley. 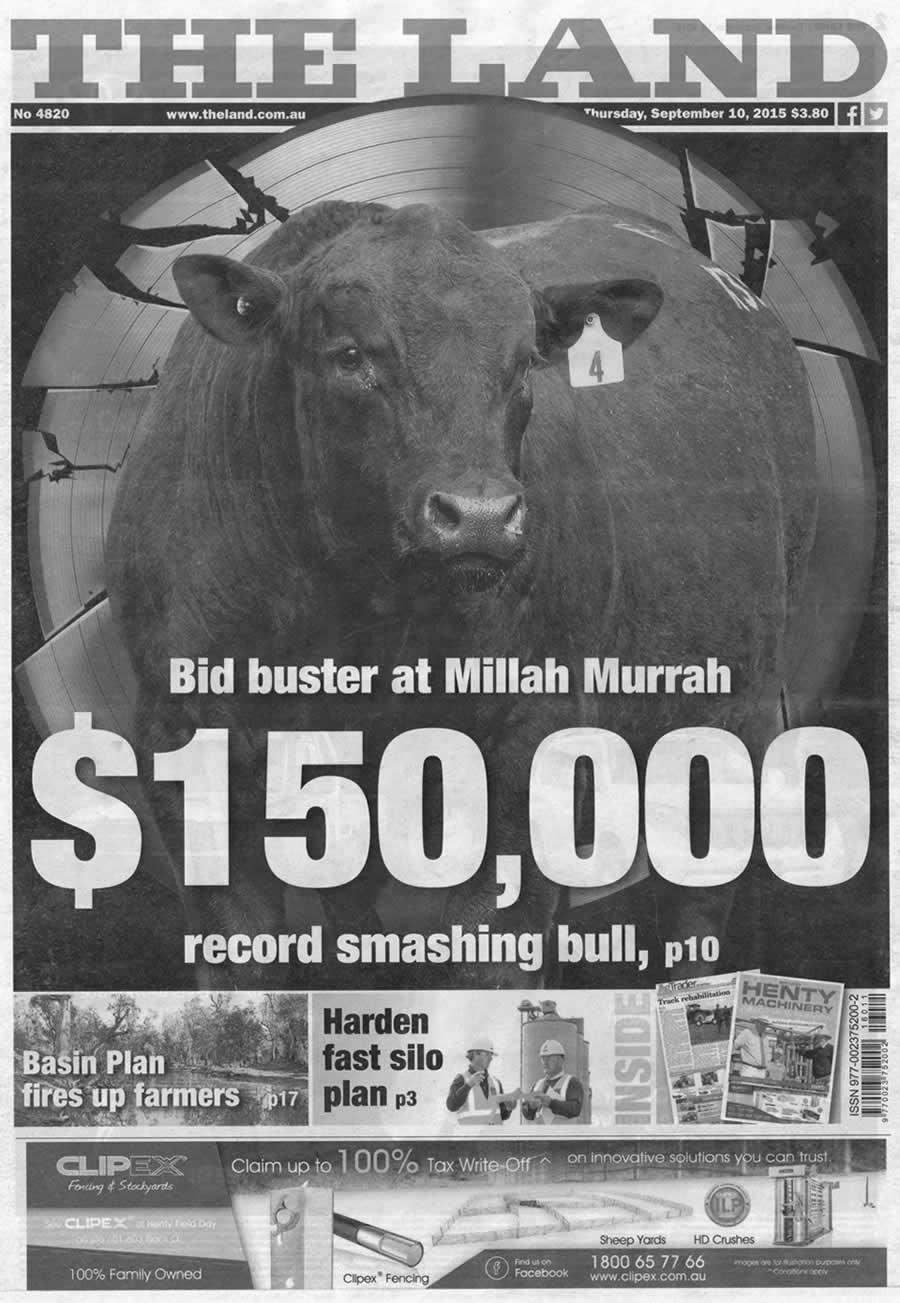