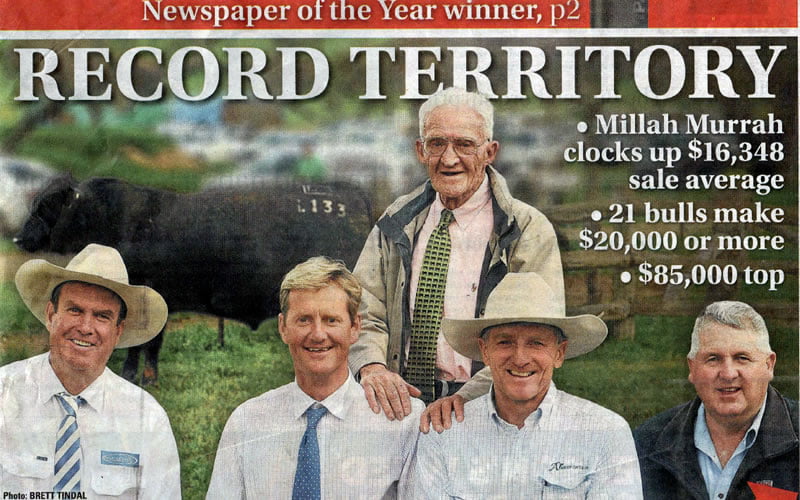 History was made at the 2016 Bull sale where 109 bulls sold to average $16,349 to set a new national record for all breeds, click here for the 2016 Bull Sale Highlights video.

A new benchmark was set for on-property bull sales at last week’s Millah Murrah Angus sale, held by the Thompson family of Bathurst. Their sale venue at “Goonamurrah” was packed as the 109 bulls offered were sold to a full clearance, topping at $85,000 to average $16,348 – a new all breeds national on-property record. Millah Murrah not only eclipsed its 2015 average of $14,876, then a new national record for the Angus breed, but it overtook the previous national all breeds record average of $15,470, set by PBF Brahmans at Sarina, Queensland, for 33 bulls the stud sold in 2005.

Millah Murrah’s result even compares well – given the number of bulls cleared – to the glitzy NCC Brahman special event sale held during the 18th World Brahman Congress in May this year where 23 female and genetic lots averaged $19,090.

The cattle market is on a high, but it was demand for quality that pushed this year’s Millah Murrah Angus bull sale at Bathurst to another record, setting a new all breeds national average price of $16,348.

This year’s sale topper was 17 month-old Millah Murrah Loch Up L133, a 788 kilogram son of US sire Thomas Up River 1614 from Millah Murrah Brenda H49. Loch Up L133 was brought forward from lot 13 to be the opening lot due to strong interest.

Loch Up L133 sold to return buyers Jim Wedge and Jackie Chard, Ascot Angus, Warwick, Queensland, in partnership with ABS Australia, represented by Bill Cornell. The bull was offered with a guarantee, having sustained an injury prior to sale, but this didn’t stop bidders keen to snap up the outstanding youngster.

Mr Wedge said Loch Up was of the type that was the focus of the Ascot operation.

“L133 was just too good to let go past. A bull that covers every base like he does, comes along once or twice a decade.”

“We bought into (the $150,000 Millah Murrah) Kingdom last year and now we have sole walking rights to this fellow. It’s a pretty exciting investment for us.”

“Loch Up has got an attractive pedigree… comes with a high quality maternal background and has a brilliant, balanced EBV set. This bull has widespread appeal.. he’s a rare combination that represents a broad spectrum joining option for the industry,” Mr Cornell said.

The second-top seller was Millah Murrah Lakeside L69, which sold to Robert Gill who runs Kamilaroi Angus at Merriwa. Mr Gill has been buying Millah Murrah bulls since 2008 and was determined to buy the son of Thomas Up River 1614 from the renowned Prue line, Lakeside’s dam being Millah Murrah Prue H113, a prominent donor by the influential Lawsons Henry V111.

Mr Shaw, with his wife Julie and in partnership with his parents Jeff and Jenny, runs 1400 Angus breeders and sells the offspring through the Roma saleyards. This year’s draft of 750 eight – to 10-month-old weaners averaged $1135.

Millah Murrah principal Ross Thompson described the sale as having been a perfect storm of a great draft of bulls offered when the beef industry was “on fire”.

“We need more bulls, and we aim to have a significantly larger number next year and the following year. We will be calving 450 cows,” he said.

The sale was conducted by Elders Bathurst, with guest auctioneer Paul Dooley, who said it was the highest grossing sale he had ever conducted.