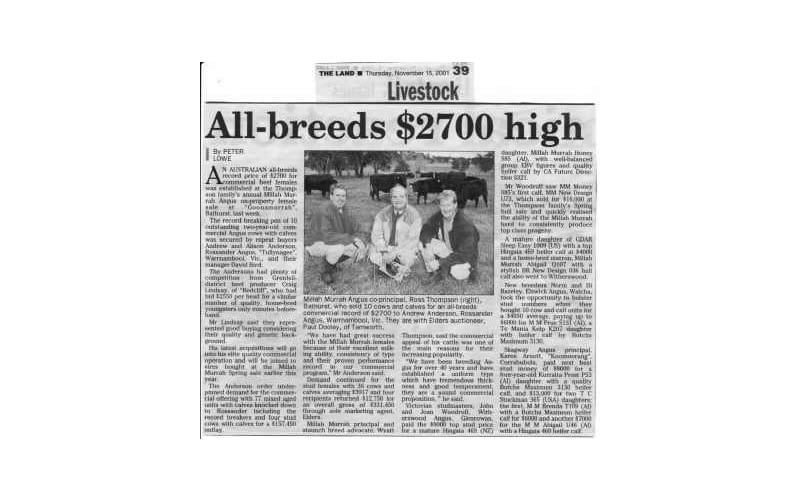 The Andersons had plenty of competition from Grenfell-district beef producer Craig Lindsay, of “Redcliff”, who had bid $2550 per head for a similar number of quality, homebred youngsters only minutes beforehand. MR Lindsay said they represented good buying considering their quality and genetic background. His latest acquisitions will go into his elite quality commercial operation and will be joined to sires bought at the Millah Murrah Spring sale earlier this year.

The Anderson order underpinned demand for the commercial offering with 77 mixed age units with calves knocked down to Rossander including the record breakers and four stud cows with calves for a $157,450 outlay.

“We have had great success with the Millah Murrah females because of their excellent milking ability, consistency of type and their proven performance record in our commercial programme,” Mr Anderson said.

Demand continued for the stud females with 36 cows and calves averaging $3917 and four recipients returned $12,750 for an overall gross of $331,450 through sole marketing agent, Elders.

Millah Murrah principal and staunch breed advocate, Wyatt Thompson, said the commercial appeal of his cattle was one of the main reasons for their increasing popularity.

“We have been breeding Angus for over 40 years and have established a uniform type which have tremendous thickness and good temperament, they are a sound commercial proposition,” he said.

New breeders Norm and Di Bazeley, Elswick Angus, Walcha, took the opportunity to bolster stud numbers when they bought 10 cow and calf units for a $4050 average, paying up to $6000 for MM Prue S131 (AI), a Te Mania Kelp K207 daughter with heifer calf by Butchs Maximum 3130.