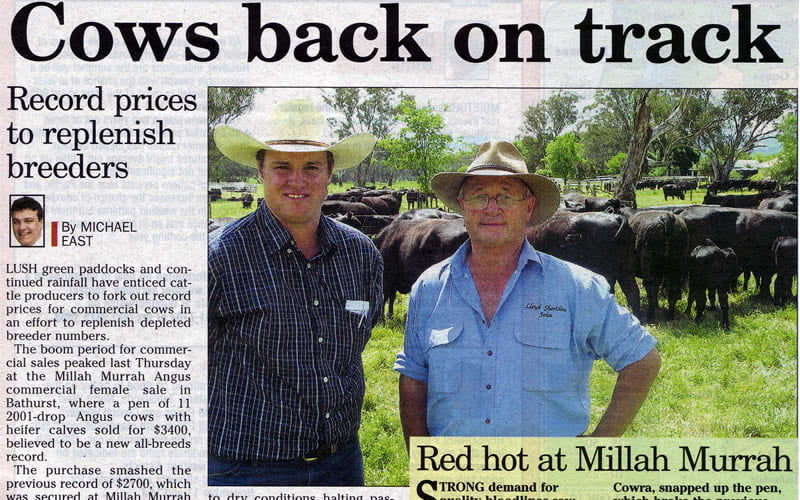 There was a total clearance of females offered by Millah Murrah Angus principals, Wyatt, Winsome, Ross and Dimity Thompson, with buyers travelling from Coolah, Tarana and the local area to attend the sale.

Mr McLaurin plans to use his purchase as a foundation for an elite nucleus of commercial females to add to his existing operation.

Millah Murrah Woody W100 was also featured in the second highest selling pen, with five cows with AI heifers by the record-making sire purchased for $2750 by Edmund Bateman, “Kangaroobie”, Orange.

Dunbier Pastoral Company was the leading volume buyer, picking up nine lots of cows with calves, five pens of heifers and three bulls through Lloyd and Sheridan Pty Ltd, Coolah.

With properties in Scone, Coolah and Bollen, Queensland, Dunbier Pastoral Company stock manager, Scott Dunbier (pictured with agent John Lloyd), said the company was looking to upgrade the quality of its herd after the turnaround in the season.

The selling agents were Elders Bathurst and Elders Dubbo.