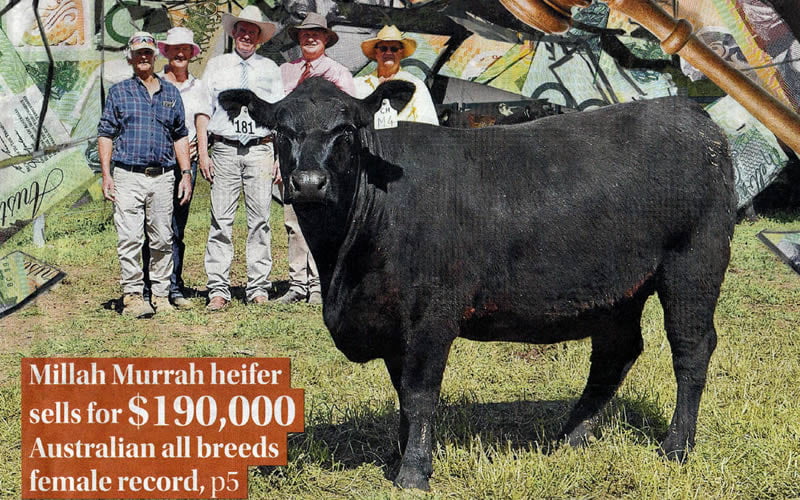 Our 2017 Cow sale recorded the highest average for a cow sale of any breed in Australasia. The sale highlights video can be watched here.

The star was in-calf heifer, Millah Murrah Prue M4, which sold for a whopping $190,000, smashing the previous all-breeds female record held since 1990 by Baldrudgery Lisa, a Poll Hereford heifer bred by the Hodges family at Baldry.

However, Prue M4 wasn’t the only headline act behind Millah Murrah’s stratospheric results.

Also the $13,709 average for 234 lots demolished the prevous record for an Angus sale of $8494 for 260 lots at the Wattletop dispersal at Guyra in May this year.

Even auctioneer, Paul Dooley, Tamworth, set a record. Mr Dooley, who has handled may of the big NSW stud sales this year, sold 191 of the 234 lots for a gross of $2.669m, which is thought to be the largest single sale gross by one auctioneer in Australia.

Along with its new all-breeds record, Millah Murrah also holds the Angus bull record of $150,000 for Millah Murrah Kingdom, sold at its 2015 property sale.

Co-principal, Ross Thompson, said there had been a shift in how buyers valued females.

“It is good to see them being valued as they should be. Stud cattle are a long term investment”, he said.

“We feel the sale reflects the strong demand for our bulls over the past seven years and 50 years of dedication to maternal function. We thought the females on offer were simply as good as we could ever hope to produce.”

“From an industry perspective, the sale underlined the seemingly endless horizon in demand for quality Angus cattle.”

“Support from within the breed was enormous, with plenty of long-term buyers of Millah Murrah genetics operating in volume, like Heart Angus, Coffin Creek, Coolie, Mandayen in South Australia, Keringa in SA, and Cherylton, in Western Australia.” 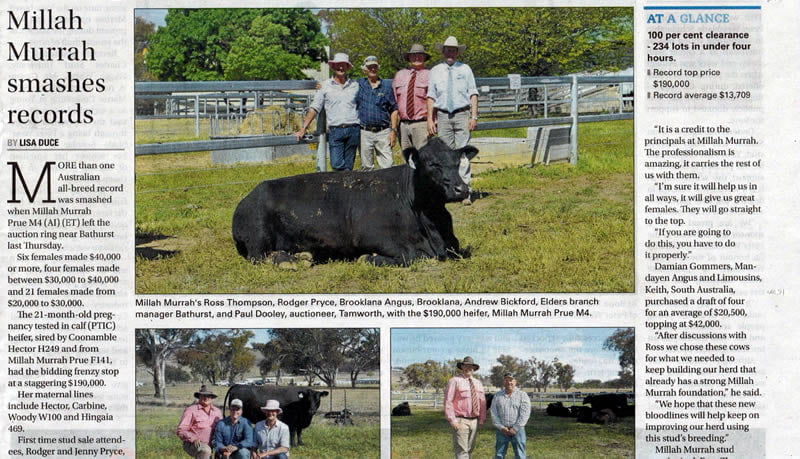 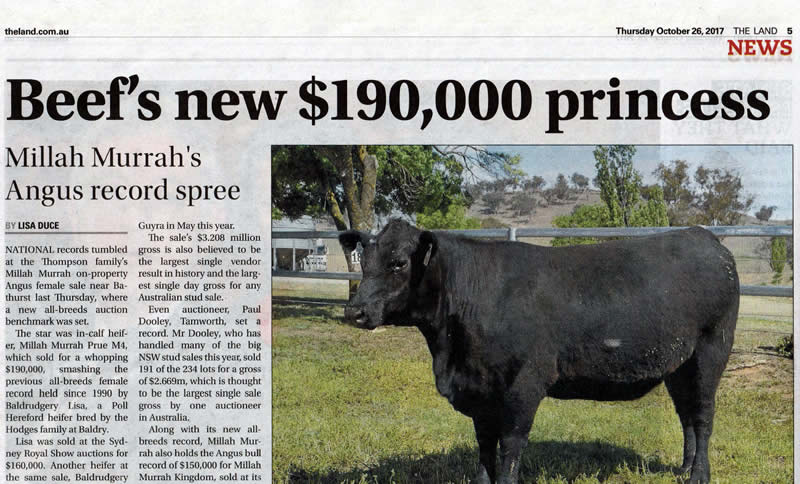 More than one Australian all-breed record was smashed when Millah Murrah Prue M4 (A1) (ET) left the auction ring near Bathurst last Thursday.

The 21-month-old pregnancy tested in calf (PTIC) heifer, sired by Coonamble Hector H249 and from Millah Murrah Prue F141, had the bidding frenzy stop at a staggering $190,000.

Her maternal lines include Hector, Carbine, Woody W100 and Hingaia 469.

Mr Pryce said he liked that she fits into their breeding program as she doesn’t have any genetic influence from Emperor or Reality.

“We have quite a lot of that in our stud already”, he said. “Structurally she ticks all the boxes for us.

“I have been following what Ross has been doing since I have got back into cattle in 2009. It is a passion.”

They also purchased Millah Murrah Lower M137 for $12,000 to keep her company.

Mr Pryce runs a small stud of 100 breeders and is thinking of downsizing to a smaller herd of 20 to 30 cows as they believe it is better to have high quality rather than quantity.

Second top purchase and also the first record breaker at $54,000 was Millah Murrah Prue H112, a PTIC daughter to Ythanbrae Henry VIII U8.

She was purchased by East West Angus stud owner, Shane Adams, Upper Bingara. They were also the under-bidder to the top priced heifer. The stud purchased a draft of five averaging $30,800.

“She is a beautiful cow from all angles,” stud manager, Josh Hreszczuk, said of the high priced cow.

“She carries herself extremely well for being such a big massive volume and capacity.”

Volume purchaser, Heart Angus, took home a draft of 11 females topping at $26,000 and averaging $12,363. They also purchased three other in conjunction with Cherylton Angus from Kojonup, Western Australia.

“We are really happy with all of them, it is hard to pick one above the others,” he said.

“They are an unbelievable line-up of cattle, the improvement they will do to our herd will be phenomenal.” He said.

“It is a credit to the principals at Millah Murrah. The professionalism is amazing, it carries the rest of us with them.”

“I’m sure it will help us in all ways, it will give us great females. They will go straight to the top.”

“If you are going to do this, you have to do it properly.”

Dammian Gommers, Manadayen Angus and Limousins, Keith, South Australia, purchased a draft of four for an average of $20,500, topping at $42,000.

“After discussions with Ross we chose these cows for what we needed to keep building our herd that already has a strong Millah Murrah foundation,” he said.

“We hope that these new bloodlines will help keep on improving our herd using this stud’s breeding.”

“We feel the sale reflects the strong demand for our bulls over the past seven years and 50 years of dedication to maternal function.

“We thought the females on offer were simply as good as we could ever hope to produce.

“From an industry perspective, the sale underlined the seemingly endless horizon in demand for quality Angus cattle.”

The sale was conducted by Elders Bathurst with guest auctioneer, Paul Dooley, and Elders’ Andy McGeoch at the rostrum.