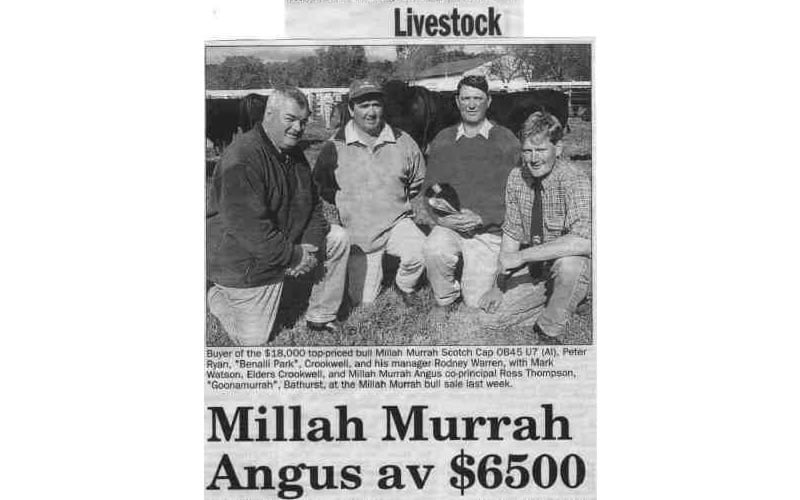 Everything pointed to a good sale – a booming cattle market, excellent stock with sought after genetics, superb presentation – but no-one, least of all the Thompson family of Millah Murrah Angus at Bathurst, expected what followed.

The Thompsons’ annual fixture at “Goonamurrah” created a new benchmark for on-property Angus sales throughout the state when their bulls averaged a whopping $6500 last week.

Millah Murrah co-principal, Ross Thompson, said it was a cracking sale well above his expectations, “but we knew our cattle were up with the best of the breed – the rest is history”.

Demand for the leading marbling genetics appeared insatiable with all the big money bids for sons of either BR New Design 036 (US) or Summitcrest Scotch Cap OB45 (US).

Elders Stud Stock auctioneer, Paul Dooley, of Tamworth, sold the catalogue of 64 bulls in a tick over the hour to gross $416,000 for Wyatt, Winsome and Ross Thompson.

The $18,000 sale topper, Millah Murrah Scotch Cap OB45 U71, a stylish son of SSCap OB45 ranked in the top one per cent of the breed for marbling and with an estimated breeding value of +1.3, went to Peter Ryan and his manager Rodney Warren for their Crookwell holding “Benalli Park”.

“This bull (U71) has the best feet I’ve seen on any Angus bull for a long time; he is a superb individual from any angle and, given his pedigree and performance, he should make a real impact on our herd,” Mr Warren said.

Millah Murrah New Design U68, a high-marbling son of BR New Design 036 and the heaviest bull of the draft at 932 kilograms, was bought by Stephen and Jodi Peake, “Bowen”, Barraba, for $17,000. U68 represents true sire potential, being ranked in the top one per cent for all dollar indices, eye muscle area and scrotal size, and ranked in the top five per cent for growth, milk and carcase figures.

Also looking for another top stud prospect, Rob Costello, of the Nairn Park Stud, “Yoothamurra”, Tenterfield, parted with $16,000 to secure Millah Murrah New Design U73, a thick, correct son of 036, with well-balanced figures.