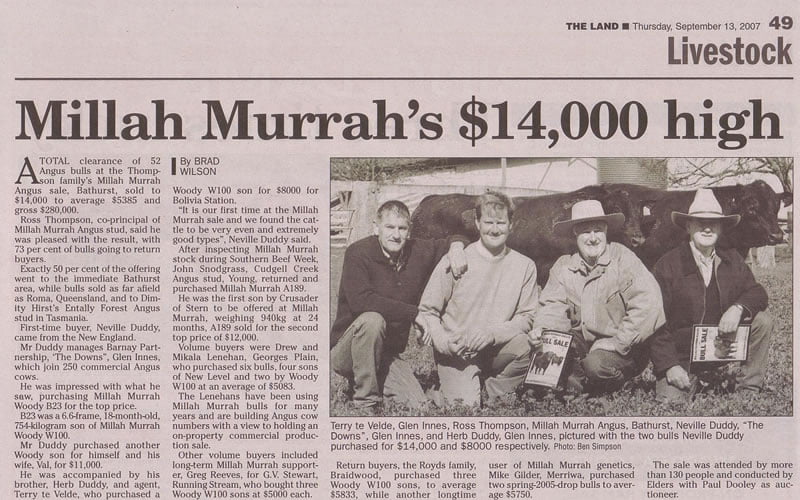 Ross Thompson, co-principal of Millah Murrah Angus stud, said he was pleased with the result, with 73 per cent of bulls going to return buyers.

Exactly 50 per cent of the offering went to the immediate Bathurst area, while bulls sold as far afield as Roma, Queensland, and to Dimity Hirst’s Entally Forest Angus stud in Tasmania.

He was impressed with what he saw, purchasing Millah Murrah Woody B23 for the top price.

Mr Duddy purchased another Woody son for himself and his wife, Val, for $11,000.

He was accompanied by his brother, Herb Duddy, and agent, Terry te Velde, who purchased a Woody W100 son for $8000 for Bolivia Station.

“It is our first time at the Millah Murrah sale and we found the cattle to be very even and extremely good types”, Neville Duddy said.

Volume buyers were Drew and Mikala Lenehan, Georges Plains, who purchased six bulls, four sons of New Level and two by Woody W100 at an average of $5083.

The Lenehans have been using Millah Murrah bulls for many years and are building Angus cow numbers with a view to holding an on-property commercial production sale.

The sale was attended by more than 130 people and conducted by Elders with Paul Dooley as auctioneer.