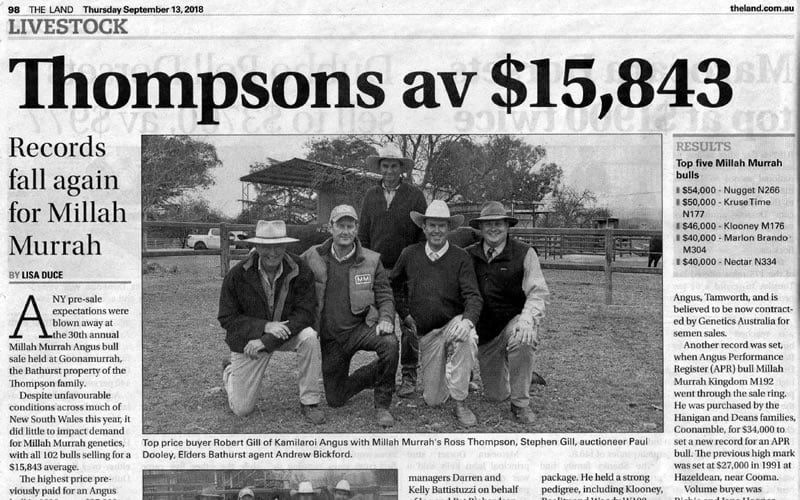 Our 2018 Bull Sale averaged $15,843 and was the 2nd highest in Angus breed history, surpassed only by the $16,348 figure attained in 2016 at Millah Murrah. The sale highlights video can be watched here.

Any pre-sale expectations were blown away at the 30th annual Millah Murrah Angus bull sale held at Goonamurrah, the Bathurst property of the Thompson family.

Despite unfavorable conditions across much of New South Wales this year, it did little to impact demand for Millah Murrah genetics, with all 102 bulls selling for a $15,843 average.

The highest price previously paid for an Angus bull in 2018 sat at $37,000, but in a few hours, Millah Murrah exceeded that figure five times.

Sired by Ascot Hallmark H147and out of a Booroomooka Theo female, Nugget N266 tipped the scales at 678 kilograms at just 13 months.

His estimated breeding values (EBVs) were just as impressive, recording a birth weight of +3.8, 600-day growth of +129, eye muscle area (EMA) of +4.8 and intramuscular fat (IMF) of +2.5. It is believed that post- sale negotiations saw ABS Australia secure joint semen marketing rights on the young sire.

“We love the genetics and we love the back up from the Thompson family,” he said.

“We planned on getting a back up bull but he may step up a bit quicker.

“We like the breeding, the style of the bull, his length and weight for age. He is full of meat behind the shoulder and right down the back leg.”

A heifer’s calf by Millah Murrah Kruse Time K400, N177 was backed by a strong pedigree, with BT Right 24J, Booroomooka Theo and Crusader of Stern in his immediate ancestry.

“We selected this bull on his conformation, structural correctness and type, “Mr Battistuzzi said.

“Being a moderate growth bull we will use him on larger framed cows. We think he represents what the Angus breed is.

“He has great calving ease and his maternal traits are spot on for what we want to do to improve our female herd.”

Top priced two-year-old, Millah Murrah Klooney M176, was 938kg and described in the catalogue as having tremendous bone, exceptional structure and an excellent balanced EBV package. He held a strong pedigree, including Klooney, Reality and Woody W100.

“We were after his genetics to cover our Ascot Hallmark and Te Mania Emperor females,” he said.

“He had a bit more grunt, more suited to the Queensland market.”

Two bulls sold to $40,000. The first was Marlon Brando M304, two year old son of Klooney who was purchased by Craig Duren, Trunkey Creek, and is believed to be contracted to ABS for semen sales.

The other bull was the youngest bull in the sale, Nectar N334, who was sired by Coonamble Hector and from Millah Murrah Prue H113. Nectar N334 was the third son from the cow to top the $40,000 mark. He sold to Chris Paterson’s Heart Angus, Tamworth, and is believed to be now contracted by Genetics Australia for semen sales.

Another record was set, when Angus Performance Register (APR) bull Millah Murrah Kingdom M192 went through the sale ring. He was purchased by the Hanigan and Deans families, Coonamble, for $34,000 to set a new record for an APR bull. The previous high mark was set at $27,000 in 1991 at Hazeldean, near Cooma.

“The buying gallery was full of outstanding and well known cattleman. To get their endorsement was a career highlight and great encouragement for the direction of our breeding program,” he said.

The sale was conducted by Elders Bathurst with Paul Dooley controlling the bids as auctioneer.