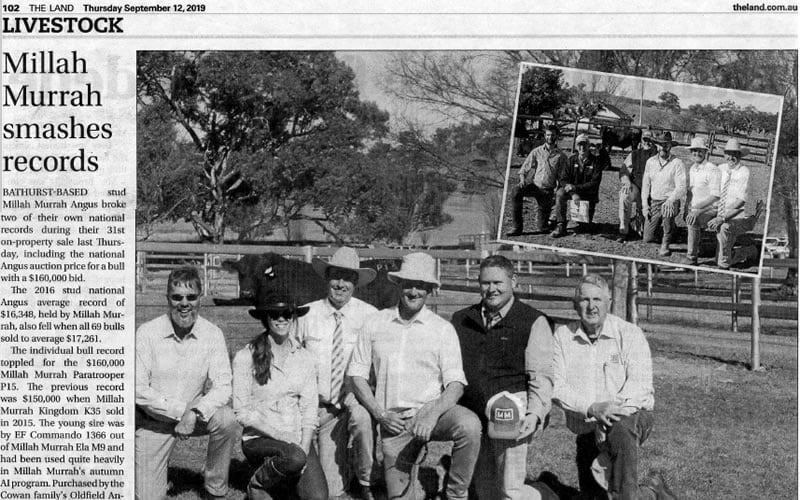 Bathurst-Based stud Millah Murrah Angus broke two of their own national records during their 31st on-property sale last Thursday, including the national Angus auction price for a bull with a $160,000 bid.

“He has the thickness, the structure, the depth of body and early maturity we are after. He’s a tremendous Angus type,” he said.

On top of that, his numbers are really good. As most know it is hard to get both numbers and phenotype.”

Delighted stud principal, Siobhan Cowan said the balanced combination the bull brought to their herd and WA clients had everyone excited.

Ascot principal Jim Wedge felt it was a fantastic day for the industry and the breed. It’s great to get some positivity in some really hard times,” he said.

“P15 was close to the perfect bull. With a hole-proof dataset and terrific phenotype, he will suit our breeding program perfectly. We will be buying semen from the bull to use in our stud.”

Underbidders were Julie and Jeremy Shaw, JS Grazing, Injune, Qld. They took home three bulls, which made them one of the volume buyers of the day, including the second top priced yearling, Millah Murrah Chisum P110 for $34,000.

“We loved his weight for age and softness,” Mr Shaw said.

“We have been buying at Millah Murrah for about 12 years. We have seen a huge improvement in our herd and won’t be changing our breeding program any time soon.

“To be breaking records in this climate is an endorsement for Ross’s breeding program. They are cattlemens’ cattle.

The two top yearlings were sons of Spicklers Chisum 255, a new bloodline found by Millah Murrah.

Millah Murrah’s Ross Thompson described Chisum 255 as one of the most aesthetically pleasing bulls he had seen in America.

“His dam stood out in a very functional herd, as did her ET progeny in the weaning pens when we visited in 2016,” he said.

It is no surprise to see 255 putting some good calves on the ground for us.”

He said the sale was mind-blowing.

I am absolutely ecstatic that bull made the money he did,” he said.

I think (Paratrooper) is a great bull for the breed right now. He has a phenomenal carcase pattern, structural integrity and moderate frame and a huge weight for age. The Millah Murrah Loch Up L133 progeny were also stunningly popular. They were appreciated right around the country.” 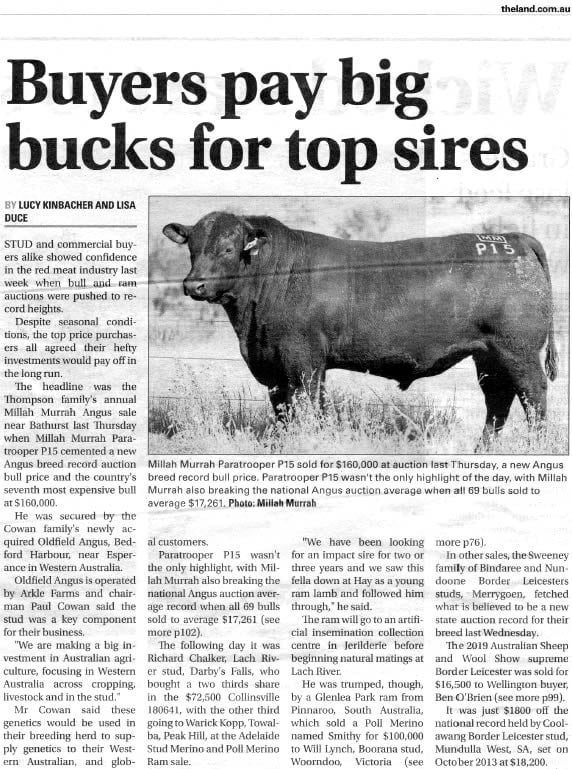 STUD and commercial buyers a like showed confidence in the red meat industry last week when bull and ram auctions were pushed to record heights.

Despite seasonal conditions, the top price purchasers all agreed their hefty investments would pay off in the long run.

He was secured by the Cowan family’s newly acquired Oldfield Angus, Bedford Harbour, near Esperance in Western Australia.

Oldfield Angus is operated by Arkle Farms and chairman Paul Cowan said the stud was a key component for their business.

“We are making a big investment in Australian agriculture, focusing in Western Australia across cropping, livestock and in the stud.”

Mr Cowan said these genetics would be used in their breeding herd to supply genetics to their Western Australian, and global customers.

The following day it was Richard Chalker, Lach River stud, Darby’s Falls, who bought a two thirds share in the $72,500 Collinsville 180641, with the other third going to Warick Kopp, Towalba, Peak Hill, at the Adelaide Stud Merino and Poll Merino Ram sale.

“We have been looking for an impact sire for two or three years and we saw this fella down at Hay as a young ram lamb and followed him through,” he said.

The ram will go to an artificial insemination collection centre in Jerilderie before beginning natural mating’s at Lach River.

He was trumped, though, by a Glenlea Park ram from Pinnaroo, South Australia, which sold a Poll Merino named Smithy for $100,000 to Will Lynch, Boorana stud, Woorndoo, Victoria (see more p76).

In other sales, the Sweeney family of Bindaree and Nundoone Border Leicesters studs, Merrygoen, fetched what is believed to be a new state auction record for their breed last Wednesday.