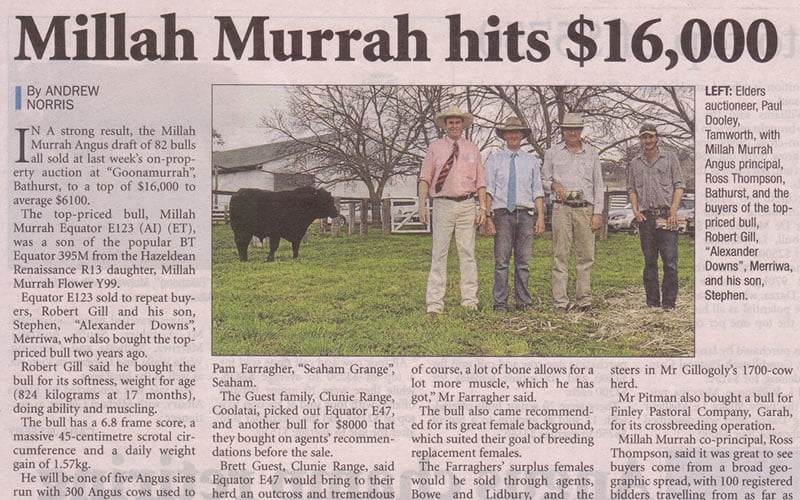 Robert Gill said he bought the bull for its softness, weight for age (824 kilograms at 17 months), doing ability and muscling.

The bull has a 6.8 frame score, a massive 45-centimetre scrotal circumference and a daily weight gain of 1.57kg.

He will be one of five Angus sires run with 300 Angus cows used to breed replacement females for a 700-cow herd.

The surplus heifers and steers will go through the family’s own retail meat business, which is why they also pay close attention to the softness.

The bull, their sole purchase, had been their pick since the Ausmectin Southern Beef Week in June.

Mr Gill said he admired the bull’s ability to carry so much weight at a young age, without being too large.

The Guest family, Clunie Range, Coolatai, picked out Equator E47, and another bull for $8000 that they bought on agents’ recommendations before the sale.

The 18-month-old bull weighed 806kg in a frame 7 and would be used on heifers as a back-up sire in an artificial insemination (AI) program, he said.

The Guests’ other purchase, Equator E28, would be used as an AI back-up sire on cows and weighed 784kg at 18 months.

The other $12,000 bull, Equator E108, the only purchase for the Farraghers, will be used in their commercial Angus herd.

Mr Farragher said they had “framey cattle” and had come to buy a bull that would add more bone and thickness.

The bull also came recommended for its great female background, which suited their goal of breeding replacement females.

The Farraghers’ surplus females would be sold through agents, Bowe and Lidbury, and the Maitland saleyards, where they had previously had great success, and they would also use the bull to breed vealers and yearlings.

Rimanui joins 1500 cows a year, breeding for the feedlot market, and Mr Brazel said he was after an even line of medium maturity bulls.

These will be used to breed replacement females and Jap ox steers in Mr Gillogoly’s 1700-cow herd.

Millah Murrah co-principal, Ross Thompson, said it was great to see buyers come from a broad geographic spread, with 100 registered bidders travelling from as far as Injune and Roma in Queensland, Moree and Kyogle, Hillston and Licola, Victoria.

However, there was also strong local support, with a third of the bulls going to areas such as Bathurst, Oberon and Orange.

About 75 per cent were repeat buyers and the BT Equator progeny had met the strongest demand, averaging $7500 for the 14 sons offered, Mr Thompson said.

Ten paddock bulls were sold immediately after the official sale.

The average price was up $500 on last year and was the second best in the history of their on-farm sales.

The gross was their best yet and Mr Thompson said they would be offering a bigger draft next year.

The selling agents were Elders and auctioneer was Paul Dooley, Tamworth.