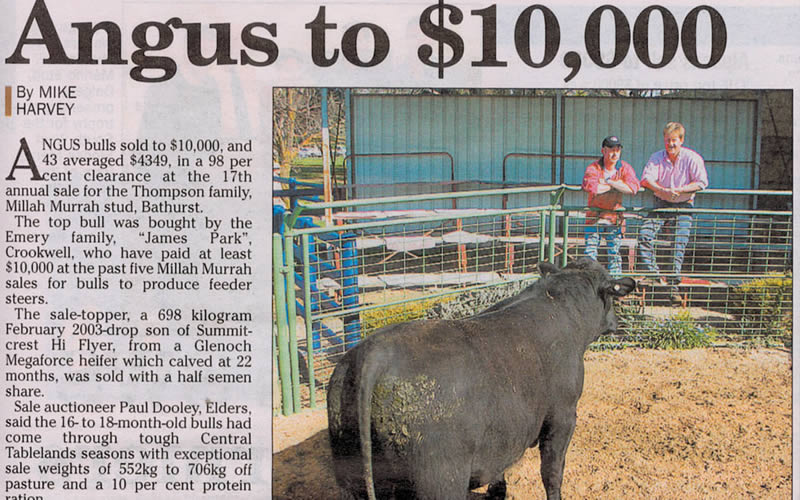 The top bull was bought by the Emery family, “James Park”, Crookwell, who have paid at least $10,000 at the past five Millah Murrah sales for bulls to produce feeder steers.

The sale-topper, a 698 kilogram, February 2003-drop son of Summitcrest Hi Flyer, from a Glenoch Megaforce heifer which calved at 22 months, was sold with a half semen share.

Sale auctioneer Paul Dooley, Elders, said the 16 to 18 month old bulls had come through tough Central Tablelands seasons with exceptional sale weights of 552kg to 706kg off pasture and a 10 per cent protein ration.

The Poole family, Llanillo stud, Wellington, paid $7000 for a March 2003 drop, 584 kg son of Hazeldean Renaissance, from a Bon View Balance female, in the best five per cent of the breed for birth weight.

The heaviest bull in the sale, at 706kg, was a March drop son of BR New Design, from a Bon View Emulation female, sold for $6000 to Harry Porch, “Hazelmere”, Mendooran, who averaged $4417 for three.

Fosters Valley Pty Ltd, Rockley, paid $6500 for a 656kg, March drop son of Butchs Maximum, and MG & DJ Hirst at Mignon Stud, Tasmania, paid the same for possession and ½ semen share in a son of Hazeldean Renaissance from a New Design female.