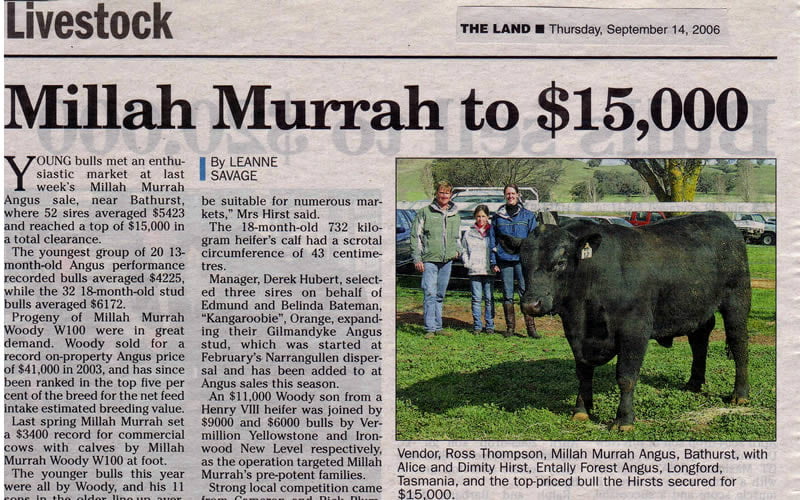 Young bulls met an enthusiastic market at last week’s Millah Murrah Angus sale, near Bathurst, where 52 sires averaged $5423 and reached a top of $15,000 in a total clearance.

Progeny of Millah Murrah Woody W100 were in great demand. Woody sold for a record on-property Angus price of $41,000 in 2003, and has since been ranked in the top five percent of the breed for the net feed intake estimated breeding value.

The younger bulls this year were all by Woody, and his 11 sons in the older line-up averaged $7955.

The top-priced sire, Millah Murrah Woody A4, a Woody son from Millah Murrah Brenda Y16, went to the Hirst family, who had traveled from Tasmania.

Dimity Hirst, Entally Forest Angus, Longford, said they had come specifically to buy the sire for their 250 female stud herd.

“He’s really long with a moderate frame, and his progeny will be suitable for numerous mar¬kets,” Mrs Hirst said.

The 18-month-old 732 kilo¬ gram heifer’s calf had a scrotal circumference of 43 centimetres.

Manager, Derek Hubert, selected three sires on behalf of Edmund and Belinda Bateman, “Kangaroobie”, Orange, expanding their Gilmandyke Angus stud, which was started at February’s Narrangullen dispersal and has been added to at Angus sales this season.

An $11,000 Woody son from a Henry VIII heifer was joined by $9000 and $6000 bulls by Vermillion Yellowstone and Ironwood New Level respectively, as the operation targeted Millah Murrah’s pre-potent families.

Strong local competition came from Cameron and Rick Plummer, Toqueeza Pastoral Company, Perthville via Bathurst, who paid $10,000 for the first lot, a 730kg 18-month-old Woody son from Millah Murrah, Flower Y10, and a second Woody son at $9000, for their commercial herd of 300 Millah Murrah-blood females.

Fosters Valley Farm manager, Ken Gardiner, Rockley via Bathurst, paid $8000 for a son of Woody, which he said was “throwing a very good type, with an excellent muscle pattern”.

Volume buyer was Rodney Royds through Landmark Braidwood, with five bulls at a $4500 average.

Ross Thompson said the family was thrilled with the response to the young bulls and progeny of Woody W100 in particular.

The sale was conducted by Elders, with auctioneer, Paul Dooley.