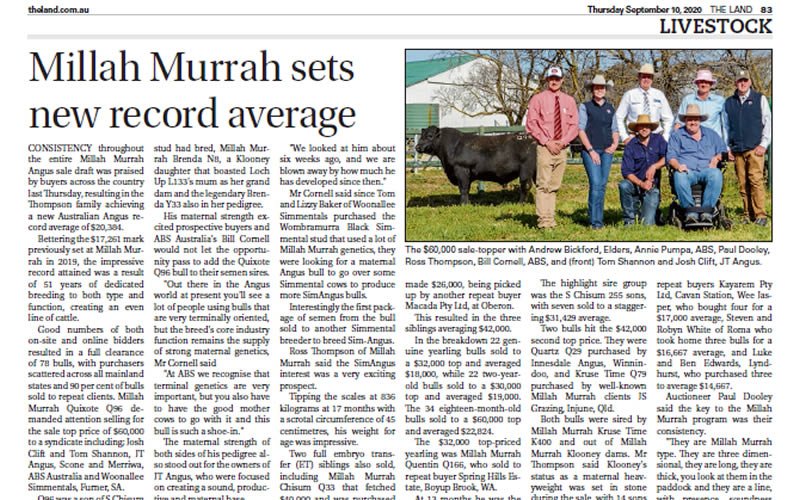 Consistency throughout the entire Millah Murrah Angus sale draft was praised by buyers across the country last Thursday, resulting in the Thompson family achieving a new Australian Angus record average of $20,384.

Bettering the $17,261 mark previously set at Millah Murrah in 2019, the impressive record attained was a result of 51 years of dedicated breeding to both type and function, creating an even line of cattle.

Good numbers of both on-site and online bidders resulted in a full clearance of 78 bulls, with purchasers scattered across all mainland states and 90 per cent of bulls sold to repeat clients. Millah Murrah Quixote Q96 demanded attention selling for the sale top price of $60,000 to a syndicate including; Josh Clift and Tom Shannon, JT Angus, Scone and Merriwa, ABS Australia and Woonallee Simmentals, Furner, SA.

Q96 was a son of S Chisum 255 and out of a female that was described as one of the most exciting cows the stud had bred, Millah Murrah Brenda N8, a Klooney daughter that boasted Loch Up L133’s mum as her grand dam and the legendary Brenda Y33 also in her pedigree.

His maternal strength excited prospective buyers and ABS Australia’s Bill Cornell would not let the opportunity pass to add the Quixote Q96 bull to their semen sires.

“Out there in the Angus world at present you’ll see a lot of people using bulls that are very terminally oriented, but the breed’s core industry function remains the supply of strong maternal genetics, Mr Cornell said.

“At ABS we recognise that terminal genetics are very important, but you also have to have the good mother cows to go with it and this bull is such a shoe-in.”

The maternal strength of both sides of his pedigree also stood out for the owners of JT Angus, who were focused on creating a sound, productive and maternal base.

“Phenotypically he was the stand-out of the day,” Mr Clift and Mr Shannon said “We looked at him about six weeks ago, and we are blown away by how much he has developed since then.”

Mr Cornell said since Tom and Lizzy Baker of Woonallee Simmentals purchased the Wombramurra Black Simmental stud that used a lot of Millah Murrah genetics, they were looking for a maternal Angus bull to go over some Simmental cows to produce more SimAngus bulls.

Interestingly the first package of semen from the bull sold to another Simmental breeder to breed Sim-Angus.

Tipping the scales at 836 kilograms at 17 months with a scrotal circumference of 45 centimetres, his weight for age was impressive.

This resulted in the three siblings averaging $42,000.

The highlight sire group was the S Chisum 255 sons, with seven sold to a staggering $31,429 average.

Both bulls were sired by Millah Murrah Kruse Time K400 and out of Millah Murrah Klooney dams. Mr Thompson said Klooney’s status as a maternal heavyweight was set in stone during the sale, with 14 sons from Klooney dams averaging $26,857.

Auctioneer Paul Dooley said the key to the Millah Murrah program was their consistency.

“They are Millah Murrah type. They are three dimensional, they are long, they are thick, you look at them in the paddock and they are a line, with presence, soundness and consistency,” he said.