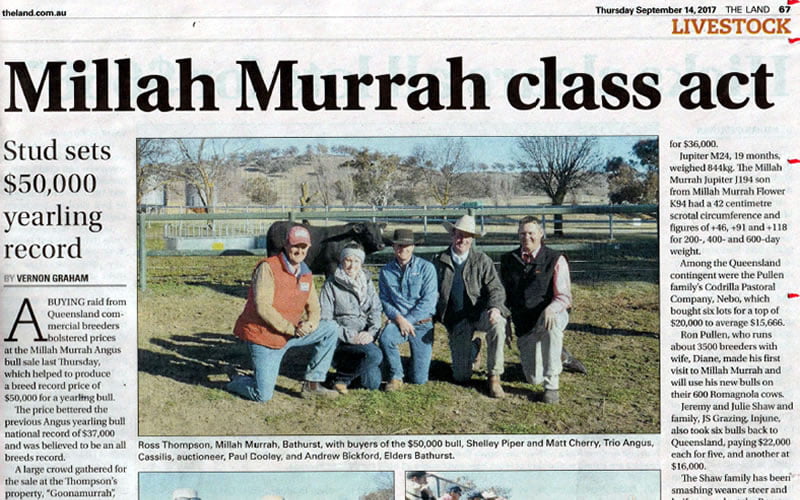 Our 2017 Bull Sale recorded the 2nd highest Angus bull sale average in history of $15,590. The sale highlights video can be watched here.

A buying raid from Queensland commercial breeders bolstered prices at the Millah Murrah Angus bull sale last Thursday, which helped to produce a breed record price of $50,000 for a yearling bull.

The price bettered the previous Angus yearling bull national record of $37,000 and was believed to be an all breeds record.

A large crowd gathered for the sale at the Thompson’s property, “Goonamurrah”, Bathurst, and witness yet another cracking result, where a total clearance of 122 bulls averaged $15,590. This was the second highest ever Angus bull sale average, only bettered by the stud’s 2016 result which set an all breeds record of $16,348 for 109 bulls.

Strong demand resulted in bulls selling into all states, yet 40 percent were snapped up from buyers within a 100 kilometre radius.

He said he was proud of the results being achieved by buyers of Millah Murrah bulls.

They will use their new 13-month-old sire, Millah Murrah Klooney M182, in their 200-head stud female herd on their 688-hectare property, “Ingleburn”, which suffered major damage during the Sir Ivan bushfire.

Ms Piper said they didn’t expect to have to pay so much for Klooney M182, but the bull had attractive maternal lines on both sides of his pedigree along with the qualities needed to positively evolve their stud.

“Ross Thompson is known for the productivity of his cows,” she said.

He was among Klooney K42’s first sons to be sold, with his draft of nine yearling bulls averaging $22,222.

Among the Queensland contingent were the Pullen family’s Codrilla Pastoral Company, Nebo, which bought six lots for a top of $20,000 to average $15,666.

Ron Pullen, who runs about 3500 breeders with wife, Diane, made his first visit to Millah Murrah and will use his new bulls on their 600 Romagnola cows.

Jeremy and Julie Shaw and family, JS Grazing, Injune, also took six bulls back to Queensland, paying $22,000 each for five, and another at $16,000.

The Shaw family has been smashing weaner steer and heifer records at the Roma saleyards for the past few years, their success encouraging others to make the trek south to Bathurst.

He came to the sale looking for “big growth bulls with plenty of muscle and bone” to produce bullocks around 350kg to 420kg (carcase weight) at two to 2.5 years old for sale to JBS Australia’s Dinmore abattoir.

The sale was conducted by Elders Bathurst, with Paul Dooley, Tamworth, as guest auctioneer.