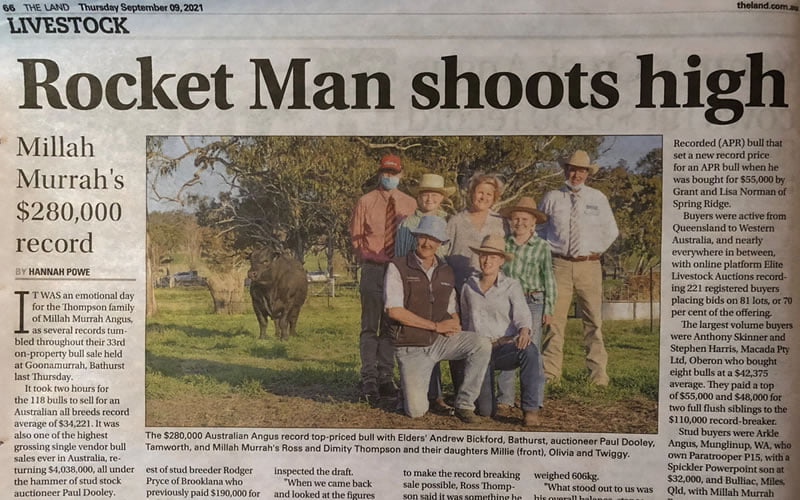 The 2021 bull sale averaged $34,221, a national all-breeds record, also believed to be an all-breeds world record for a bull sale of 100 head or more. The high seller was Rocket Man R38 who sold to Brooklana Angus with ABS securing global semen marketing rights following the sale. Nipping at his heels, Rembrandt R48 fetched $240,000, secured by a syndicate of buyers, with ABS as the semen marketing agent and part owner. These two bulls set the highest price for an Angus animal in Australian history.

It was an emotional day for the Thompson family of Millah Murrah Angus, as several records tumbled throughout their 33rd on-property bull sale held at Goonamurrah, Bathurst last Thursday.

It took two hours for the 118 bulls to sell for an Australian all breeds record average of $34,221. It was also one of the highest grossing single vendor bull sales ever in Australia, returning $4,038,000, all under the hammer of stud stock auctioneer Paul Dooley.

The remarkable feat is also thought to be a world-record average for a bull sale over 100 head at $25,322 USD.

But the records did not stop there, when the highly anticipated Millah Murrah Rocket Man R38 was knocked down to Brooklana Angus, Dorrigo through Ray White agent Tim Bayliss for a new Australian Angus record price of $280,000.

A son of the $160,000 Millah Murrah Paratrooper P15, that was a previous record-holder, he was the first calf out of Millah Murrah Abigail P57 and was used naturally in the stud.

Presenting with all selection indexes and five traits within the top five per cent of the breed, the 19-month old weighed 844 kilograms with a 45-centimetre scrotal circumference.

On Tuesday it was announced that ABS Australia had secured the worldwide semen marketing rights of Rocket Man R38, with spokesman Bill Cornell commenting that his physical attributes are as impressive as his spread of estimated breeding values and his maternal ancestry.

These two sires exceeded the previous record of $225,000 set by Texas Iceman R725 in July.

Bill Cornell of ABS Australia said the two high-sellers were standouts back in June when they inspected the draft.

“When we came back and looked at the figures – these two bulls are just sublime with respect to what the market wants today,” he said. “Paratrooper is breeding the house down, and we just can’t keep up with supplies, so we needed to get at least one son.”

“The thing about Rembrandt is his pedigree. You follow it down and you have Paratrooper, Kingdom, Emperor and Woody – you have four champion, high-priced bulls.”

The power of Paratrooper P15 continued throughout the draft with 43 sons sold to average $46,990.

With all the stars aligning to make the record breaking sale possible, Ross Thompson said it was something he could have never envisaged.

“A feverish cattle market, a red hot bull in Paratrooper – his calves everywhere are exceptional and these are the first of them to be offered for sale,” he said. “The increased marketing necessitated by COVID. Everyone is going to new levels with videoing bulls and personal interaction is critical. For ten days my phone has been ringing off the hook”.

“We may never see this alignment of events again.”

Under bidders of the $240,000 second top-priced bull were the Paterson family of Heart Angus, Timbumburi, who went on to pay a new record price for a true yearling Angus bull of $110,000 for Milah Murrah Rolls Royce R275.

“What stood out to us was his overall balance, stance, skin type, structure, and the meat in him for a yearling bull – we think he is going grow out well,” Mr Paterson said. “We own Nectar (N334) and he is doing a really great job. We think this fellow will complement the Nectar daughters beautifully.”

New Zealand rights were secured by Hallmark Angus, with the Western Australian rights in Paratrooper R275 secured by an undisclosed buyer.

Included in the line of Paratrooper P15 sons was Millah Murrah Paratrooper R250, an Angus Performance Recorded (APR) bull that set a new record price for an APR bull when he was bought for $55,000 by Grant and Lisa Norman of Spring Ridge.

Buyers were active from Queensland to Western Australia, and nearly everywhere in between, with online platform Elite Livestock Auctions recording 221 registered buyers placing bids on 81 lots, or 70 per cent of the offering.

Stud buyers were Arkle Angus, Munglinup, WA who own Paratrooper P15 with a Spickler Powerpoint son at $32,000 and Bulliac, Miles Qld with Millah Murrah Partrooper R94 for $46,000.

In closing the sale, Mr Thompson said he and Dimity were so very proud, and one of the special parts of this year’s sale was having their kids there to be a part of the milestone.

All the stars align for record breaking sales

A STRONG cattle market, elite genetics and digital auction platforms are among the reasons why bull sales have skyrocketed to new heights this week.

Several records fell, with the Millah Murrah Angus Bull Sale, Bathurst, leading the headlines for what is believed to be both an Australian all-breeds and a world-record average for a bull sale, with 118 bulls sold for a $34,221 average.

This surpasses NCC Brahmans’ 2017 sale in Queensland where 76 bulls averaged $26,915 and the US Angus stud, Schaff Angus Valley, St Anthony, North Dakota, and its 2015 sale where 487 yearling bulls averaged $20,025. The Millah Murrah sale was also one of the highest grossing single vendor bull sales in Australia, returning $4,038,000, closely followed by Booroomooka Angus, Bingara, with $4,004,784.

A new record price for a true yearling Angus bull of $110,000 was paid for Millah Murrah Rolls Royce R275 by Heart Angus, Timbumburi. 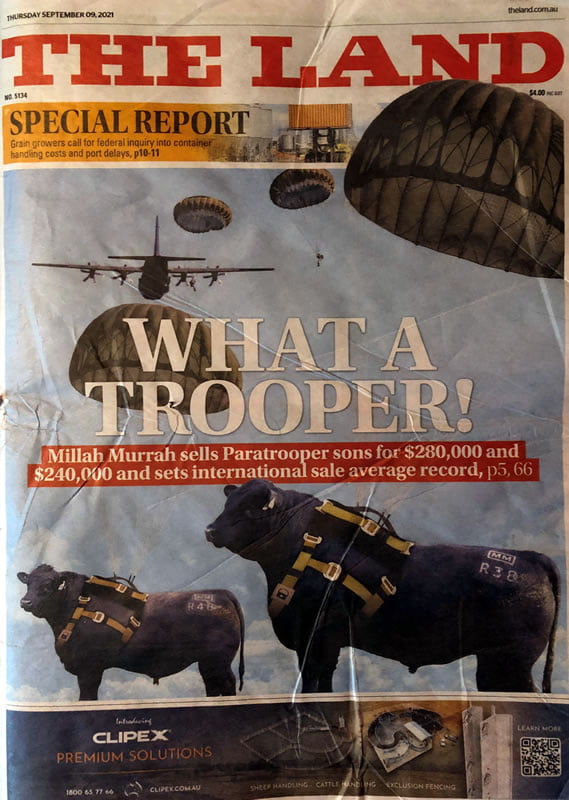