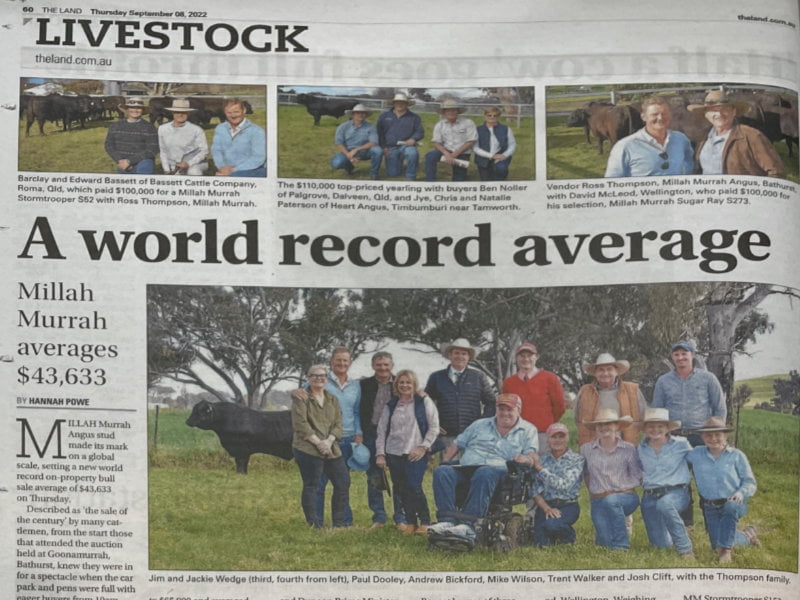 Millah Murrah Angus stud made its mark on a global scale, setting a new world record on-property bull sale average of $43,633 on Thursday.

Described as ‘the sale of the century’ by many cattlemen, from the start those that attended the auction held at Goonamurrah, Bathurst, knew they were in for a spectacle when the car park and pens were full with eager buyers from 10am.

The electric atmosphere had people from all states and territories, as well as a large contingent from New Zealand, in absolute awe as prices remained strong the entire sale.

Afterwards, Mr Thompson said he was numb. “We were very confident in the bulls. In the sale lead up, several industry veterans told us it was the best draft of bulls they had seen, and we felt the same way,” he said. “Discussions with buyers in the weeks ahead indicated that budgets were strong. So, we knew we were in for a big day. But never in my wildest imaginings did I hope we would top last year’s result.”

Jim Wedge of Ascot, said they were seeking a bull to put on their Millah Murrah Paratrooper P15 and Dunoon Prime Minister P758 progeny.

“He is a very complete bull. The main reason was he is an outcross to a lot of what we already have in our herd,” Mr Wedge said.

“He ticked all the boxes also for structure, thickness, great feet and legs, head, temperament and was a bull that really looked like a bull with good raw data.

“He had a good balance of figures across the board, but we mainly want bulls that look like bulls, which will breed bulls.”

“The bloodlines lines for a start drew us to the bull (Stormtrooper S52),” Edward Bassett said. He is an outstanding bull and will be used over Millah Murrah heifers of Chisum bloodlines.

“We’ve found the Millah Murrah bulls are athletic, structurally sound. Their temperament is excellent, and we have had good success with them, particularly with fertility.

“Using Millah Murrah bulls we have achieved 100 per cent heifer pregnancy rates which is important for us in driving profitability.”

“He (Sugar Ray S273) stood out in the sale as a very well put together bull with good weight for age and a good sirey head,” he said. “I also like the Lot 5 top-priced bull, so when I missed him, I purchased this bull which had good sire presence.”

Mr McLeod aims to breed moderate maturity cattle and has bought from Millah Murrah for 12-15 years.

“They’re the only stud I buy from,”he said. “We’ve bought here every year and even bought cows from the stud’s sales.” 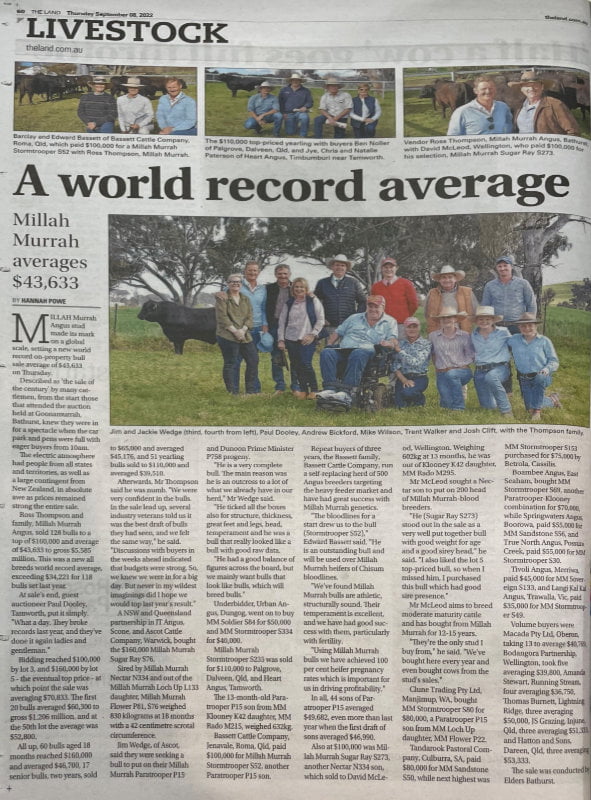